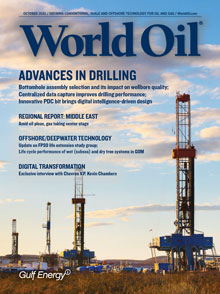 Miguel Hernandez
An ABS-led consortium has spent the last year identifying operational and safety challenges with aging FPSOs. For the future, these challenges require changes in the design phase to mitigate some issues and costs for retrofitting and further changes.

U.S. midterm elections have significant implications for the oil and gas industry

Dr. Roger Bezdek
Much is at stake in these elections that could help or hurt the health of the U.S. upstream sector. This will be the first election affected by the redistricting that followed the 2020 census. The Republicans are favored to retake a majority in the House, but control of the Senate remains a “tossup.”

In this exclusive interview, Chevron’s V.P. for Subsurface gauges the industry’s efforts to more thoroughly harness digital technology and discusses his own company’s projects to bring digital benefits to all its operations.

Jim Redden
With a contentious cohort largely sidelined, the Saudi Arabia-led OPEC+ alliance is reinforcing a hard truth: the coalition is firmly in control of the global oil market.

Ben Fletcher
The latest round of EPA regulations may mandate zero emission devices for well sites, but this issue can be addressed by a variety of automation solutions to meet those standards, while improving profitability.

When slick is not smooth: BHA selection and its impact on wellbore quality

First Oil: To our U.S. readers: Vote like your job depends on it

Kurt Abraham
(WO) — Within a few days after this issue is distributed to you, we will once again be upon another fateful moment in U.S. history—the 2022 mid-term elections. Accordingly, we ask the understanding of our loyal readers outside the U.S., for this momentary indulgence.

Leonard Kalfayan
The concept of nanobubbles was not proposed until 1994, to explain the underpredicted attractive forces observed between hydrophobic surfaces in water. Their existence in a solution, or even if that were accepted, their ability to maintain their size and suspension in a solution, has been the subject of controversy and considerable experimentation.

Oil and Gas in The Capitals: For the U.S. oil and gas industry, has “everything really changed?”

Dr. Roger Bezdek
In February, Russia initiated its unwarranted invasion of Ukraine and ignited an international energy crisis. Immediately thereafter, it appeared that the world and the U.S. would realize the mistakes made in relying on Russian O&G and on unreliable, expensive renewable energy.

Mark Patton
The David Bowie song referenced in the headline comes to mind as we look at how produced water management will be evolving. This evolution, however, is happening quicker than some have predicted.

Jeff Eshelman
In this time of continuing uncertainty, one thing is certain: a healthy oil and natural gas industry is good for America—bolstering the economy and national security.

Craig Fleming
Since day one, the Biden administration has set the U.S. on a path toward more reliance on foreign energy from countries with lower environmental standards. Caving to green activists, President Biden launched an overly aggressive environmental campaign designed to phase out the U.S. hydrocarbon industry and the immense value it provides our country in terms of energy independence and employment opportunities.
Resources