Since day one, the Biden administration has set the U.S. on a path toward more reliance on foreign energy from countries with lower environmental standards. Caving to green activists, President Biden launched an overly aggressive environmental campaign designed to phase out the U.S. hydrocarbon industry and the immense value it provides our country in terms of energy independence and employment opportunities.
Craig Fleming / World Oil

Since day one, the Biden administration has set the U.S. on a path toward more reliance on foreign energy from countries with lower environmental standards. Caving to green activists, President Biden launched an overly aggressive environmental campaign designed to phase out the U.S. hydrocarbon industry and the immense value it provides our country in terms of energy independence and employment opportunities. 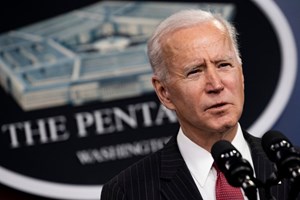 On his first day in office, Biden revoked the permit for the Keystone XL pipeline and rejoined the Paris Agreement. The move to block the $9 billion project was a clear signal that constructing a new pipeline in the U.S. had become a near impossible task. Biden’s lack of leadership and foresight has far-reaching consequences for U.S. energy security and beyond.

Biden’s blunders intensify. Intelligence analysts told Biden that Russian President Vladimir Putin felt the U.S. was “chastened by the humiliating” withdrawal from Afghanistan (Washington Post). This was one of the factors that contributed to Putin’s decision to invade Ukraine. Biden had already strengthened Russia by freezing arms sales to Ukraine and opposing sanctions against the Nord Stream 2 pipeline. These moves by Biden strengthened Russia’s hand in Europe. Combine that with Biden's abandonment of American allies in Afghanistan to the Taliban, encouraged Putin’s bold move into Ukraine.

OPEC+ cuts production. Despite a visit by President Biden to Saudi Arabia in July, OPEC+ agreed on Oct. 5 to reduce its collective crude-output target by 2 MMbopd, sparking condemnation from the U.S., which accused OPEC of aiding Russia’s war in Ukraine. But according to OPEC, the decision was motivated purely by supply and demand and the drop in prices since the meeting shows it was the correct decision, said UAE Oil Minister Suhail Al Mazrouei. Oil ministers from Congo and Equatorial Guinea reiterated this defense, while OPEC’s top official said the group had little choice but to take preemptive action.

The oil market faces “very real potential for a global recession, which some may say has already started,” OPEC Secretary-General Haitham Al-Ghais said at African Energy Week in Cape Town. “There was a consensus among the ministers regarding the need to act now and prevent a crisis later on.” The agreement to curb production between OPEC and its allies triggered a war of words between the U.S. and Saudi Arabia. The White House accused the Kingdom of coercing other countries into the supply cuts and taking Russia’s side in its war in Ukraine. The IEA said the cartel’s decision could tip the world into recession. In the weeks since the meeting, Saudi Arabia and other OPEC+ members repeatedly said the motivation for the cuts was purely economic. “It was a technical decision, it had nothing to do with politics.”

U.S. pushback. Days before the OPEC oil production cut, U.S. officials called on Saudi Arabia to delay the production cuts for another month. The answer was a resounding “no.” Biden’s weak administration and lack of initiative in guiding foreign policy was undoubtedly a factor in OPEC’s decision. U.S. officials “warned” Saudi leaders that a cut would be viewed as a choice by Riyadh to side with Russia in the Ukraine war and that the move would weaken already waning support in Washington for the Kingdom. Saudi officials dismissed the requests, which they viewed as a political move by the Biden administration to avoid higher energy prices before the U.S. midterm elections.

After-action spin. Adrienne Watson, National Security Council, rejected Saudi contentions that the Biden administration efforts were driven by political calculations. U.S. officials questioned a Saudi analysis that the price of oil was about to plunge and urged them to wait and see how the market reacted. If the price did collapse, U.S. officials told their Saudi counterparts, OPEC+ could react whenever they needed. “It’s categorically false to connect this to U.S. elections,” Watson said. “It’s about the impact of this shortsighted decision to the global economy.”

Desperation sets in. The release of 15 MMbbl of oil from the U.S. strategic petroleum reserve in October is another example of how Biden’s U.S. energy policy has created a horrific shortage of crude and refined petroleum products. It’s the final tranche of oil from a program the White House began in the spring to release a total of 180 MMbbl from the SPR to address high gasoline prices.

The Biden administration is also prepared to conduct additional SPR sales if conditions require it. “We think that this will make some difference,” said National Economic Council Director Brian Deese “We’re going to keep at it. Keep a close eye on these things with an understanding  that we have these tools on the table and we’ll deploy them when it’s in America’s interest.”

Republican Representative Cathy McMorris Rodgers (R-Wash.) slammed the move saying, “Instead of using the SPR for political bailout and empowering America’s adversaries, President Biden should end his war on American energy and join Republican efforts to reclaim our energy dominance.”

Poor policy creates shortages. Like a stack of dominos falling one after another, Biden’s decision to crush the U.S petroleum industry is fueling inflation and destroying our economy. Demand for diesel is surging, while supplies are at their lowest seasonal level ever. The fuel shortage is a key concern for the Biden administration heading into winter. National Economic Council Director Brian Deese said that diesel inventories are “unacceptably low” and “all options are on the table” to build supplies and reduce retail prices. The U.S. has just 25 days of diesel supply, the lowest since 2008, according to EIA. At the same time, the four-week rolling average of distillates supplied, a proxy for demand, rose to its highest seasonal level since 2007.

Diesel inventories nationwide are at lowest seasonal level ever heading into winter, and some areas in the Northeast have started rationing fuel. The shortage is certain to drive up the price for the heating and trucking fuel, further straining household budgets and fueling inflation. The U.S. is now going to import diesel from several overseas suppliers (at a price premium).

Broken record. The Biden administration should be helping companies increase U.S. production rather than putting pressure on OPEC+ to fill the supply gap. If the administration wants more supply to lower gasoline and diesel prices, they should ask U.S. producers first. And remember “all options are on the table” right? Or is that just more meaningless talk? I know, it’s a rhetorical question.