Oilfield electrification can mean different things, but generally it’s defined as the shift away from power provided by on-site generators utilizing fossil fuels, toward power provided by the electric grid and using electric drive equipment.

When companies make the decision to begin electrifying oil fields, typically it’s during a period of expected growth or  increased production that motivates decisions to do things differently. As one recent E&P electrification initiative found, increasing electrified production forecasts over the next five years would require an additional 500 megawatts (MW) of electric power supply to support expansion plans (others have forecasted well over a Gigawatt). While the electric utility servicing the area did have adequate capacity to serve the forecasted load in the existing high-voltage transmission system, the utility could not make the case in its regulatory structure to provide the needed electrical infrastructure to the E&P company without substantial risk to other existing rate payers.

Challenge. If an E&P wants to become electrified, it will be up to the operator to build, own and operate much of the infrastructure. Looking to the future, building privately-owned electric grid infrastructure requires an analysis of load requirements, geographic load dispersion, supply chain and equipment lead times. It also requires load capacity available from local utilities and grid interconnection request processes. These are only a few of the steps necessary to interconnect with an electric grid. 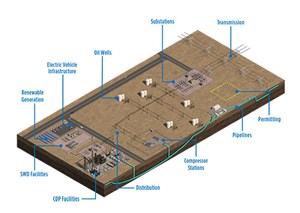 Power system plans will assess and map the area transmission system as a starting point to develop interconnection options. Perhaps existing utility infrastructure exists, such that electrification investment remains limited to lower-voltage distribution infrastructure. There is the possibility that some investment in high-voltage transmission infrastructure will be required. Geospatial information on the wellfield layout will provide many of these answers, Fig. 1.

E&Ps may have additional power supply options as well. If significant megawatts are supplied under power purchase agreements (PPA), there may be renewable energy credits (REC) available. Tariff assessments and PPA deals can help to minimize the costs of operating an electric grid by negotiating with the utility providers, either directly or through liaison with experience in the electric utility industry. If the production basin is in a wind resource area, it might be prudent to build a wind farm or some other form of renewable generation. Once a direction on power sourcing is established, resources can be evaluated, Fig. 2.

Within specific U.S. geographic regions, the generation mix of resources deployed by utilities and other power providers can cause variations of greenhouse gases (GHG) emitted per kilowatt-hour (kWh). No matter the emissions level per kWh from the grid, it is still far less than the GHG/kWh produced by a fleet of fossil fuel-based generators deployed on-site at well pads. They simply cannot compete with GHG emissions per kWh produced by the electric grid.

Fig. 2. The business of generating electric power is complex and can require a purchase agreement to secure the best price.

Having a planning and design team to work directly with E&P production teams also can provide dual benefits. Scheduling infrastructure buildout in coordination with drilling schedules allows for use of electric drilling and electric fracing (e-frac) rigs. By planning for electric infrastructure to be built months before an oil well is developed, the system can be designed to handle the large load associated with electric drilingl rigs and e-fracs, Fig. 3.

With proper planning, the E&P will then get the added benefit of using that infrastructure later to power several electric submersible pumps (ESP) for the long term without having to overbuild the system. Production team schedules can change, week to week, as conditions on (or under) the ground change. Having a flexible and dedicated team of engineers to develop the electrical infrastructure is key to gaining the most benefit from both phases of the electrified equipment implementation.

A relatively dense well field will create some differences in the need for equipment regulating and controlling power quality. Will there be several large motors, drives or devices that create harmonic distortions? With these units starting and stopping frequently, 60-hertz cycles can be pulled out of optimal wave lengths for a condition sometimes known as “dirty power.” Multiple solutions are available, including options to scale the load up or down, depending on projected need.

If load might ramp up or down frequently between 100 MW and 200 MW, will it be necessary to overbuild for that type of surge capacity? If the load will be highly variable over two or three years, but then relatively stable for subsequent years, some power quality issues can be resolved with filters or other means of voltage support. Those hurdles can be crossed easily, but only if identified early.

Cost savings potential. While the effort may appear daunting, E&Ps find real cost savings associated with removing on-site rental generators and enjoy increased electrical reliability. To determine OpEx savings, power usage should be established, based on forecasted drilling and production schedules. An average rate can be established for the cost of on-site generators compared to the equivalent cost of grid power. The cost of the electrical infrastructure can then be added to get a comprehensive picture and compare potential solutions. Up-front planning provides executives with a strategy of exactly how long it would take for the project to be paid off, based on expected savings as well as estimates for reducing GHG emissions. 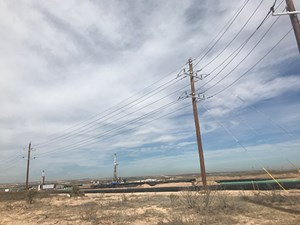 In one recent case in the Permian basin, an economic analysis and feasibility study revealed the potential for more than 40% in power-related savings, with the added benefit of GHG reduction, due to a conversion from on-site generation to grid power. This particular E&P then decided to invest in the electrical infrastructure required, which includes nine switchyards, four substations, and up to 400 mi of electrical distribution lines. The project showed a rate of return in less than three years, with additional benefits possible during long-term operation including options to install more centralized power generation and/or renewable energy with back-feed capability designed into the system. Having the electrical infrastructure in place opens the door to even more options to reduce Scope 1 and Scope 2 emissions.

As electric vehicle (EV) technology rolls out, several E&Ps have begun plans to replace fleets of diesel trucks with electric models, where hub-and-spoke trucking routes create the ideal opportunity. Saltwater disposal (SWD) wells have been identified as good potential candidates for EV trucks, as they make their routes to transport water. EV charging infrastructure can be added to the SWDs, powered by the electric grid infrastructure put in place to electrify facilities.

Supply reliability key factor. Outages of any kind cause deferred production. Planning for a reliable and redundant power supply will reduce both the frequency and duration of outages. Modern power distribution system monitoring technology allows for rapid fault location identification, thus improving technician response times and reducing the time a well may be out of service. Automation technology, smart switches and reclosers built into a properly designed system reduce outage frequency, as power can be redirected to keep oilfield loads energized from alternate sources. Smart devices and data collection in the power system allow for fault tracking, trend analysis and prediction of potential impending failures to make data-driven improvements along the way. Highly reliable grid power also reduces maintenance costs for localized generators that must be taken offline repeatedly. As these generators are replaced by grid power, monthly lease operating expenses will decrease.

Emissions reduction. As highlighted in their 2020 Corporate Sustainability Report, Burns & McDonnell client BPX Energy fully electrified its new Grand Slam Central Delivery Point (CDP) in the Permian basin, resulting in 245kteCO2e of sustainable emissions reductions and reducing flaring from 16% to under 2%. The system was fully operational within one year of the planning and design phase. Delivering GHG emission reduction solutions like this as part of an ESG portfolio can improve access to capital. Investors direct their money where they believe companies are making plans for long-term success. The cost of carbon will only increase, so planning ahead with an electrification strategy will put E&Ps in a better position in capital markets.

Not all electrification involves greenfield facility and infrastructure planning. Many E&Ps and midstream companies are operating legacy CDP and compressor station assets powered by combustion-driven compressors, fueled by the very gas coming from the wells or pumped through the pipeline. Some of these facilities are operating at or near permitted emissions levels, limiting the ability of the facility to expand or increase throughput. Fortunately, electric drive compressors do not add to the overall emissions permitted, but electrical infrastructure would likely have to be beefed up to handle the new large electric loads associated with electric drive compressors. This is the time to consider sufficient load capacity for future compressor conversion from combustion to electric drive. If the facility substation is going to be expanded to handle new compressors anyway, planning for sufficient capacity to convert existing compressors later makes sense.

Beyond simply buying larger MVA-rated transformers and upsizing switchgear, thought must be given to whether existing distribution lines to a facility can handle the increase in load. Further upstream, the high-voltage substation may have to be evaluated to see if it can handle the increase in load. Even further upstream, the electric utility will have to be consulted to see if they have enough capacity on their transmission lines to support the growing load. Brownfield electrification of existing CDPs or compressor stations still requires a system-wide analysis. But converting combustion-driven compressors to electric-drive compressors will reduce the facility emissions and increase the margins of allowable emissions granted under permitting. This headspace can potentially reveal new opportunities for gas wells that were previously not obtainable within the emissions permit limitations.

FEED and planning key to success. The most important takeaway to consider in oilfield electrification efforts is that proper studies and front-end engineering and planning of an entire system approach will pay off. There is no shortage of horror stories around developing shale plays in which poorly designed electric infrastructure caused deferred production, safety hazards to the public and environment and endless quick-fix costs for a substandard system.

One E&P in the Permian reported the results of a piecemeal approach after building distribution line lateral after lateral, scabbing onto a system that wasn’t originally designed with a whole-system approach. This E&P faced daily outages with no means to determine fault causes or immediate location. While this approach certainly electrified some locations faster, it led to cost overruns and severely diminished reliability over the long term. E&P players who wisely plan for, and invest in, good electric infrastructure continue to enjoy a steady and reliable supply of utility power energizing oil fields, reduced GHG emissions, and lowered operating costs, compared to competitors.

Path to net-zone. Many large E&Ps and midstream companies have declared net zero goals with varying timeframes of completion targets. There are a variety of options and strategies that can be implemented to reduce emissions, including CCUS, hydrogen and carbon offsets among other solutions, but multiple studies show that electrification offers the biggest return on GHG emission reductions per dollar spent. Alongside basic actions like plugging leaks, oilfield electrification has continuously proven to be the lowest hanging fruit. The earlier that the infrastructure planning begins, the more successful the outcome will be.