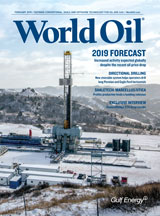 James West
Worldwide E&P expenditures should grow 8% during 2019. North America’s uptick will continue, but at a slower rate, while international activity should energize the OFS sector.

Dr. Roger Bezdek
In the November 2018 mid-term elections, all 435 seats in the House of Representatives, 35 Senate seats, and 36 governorships were contested.

Activity outside the U.S. to grow at moderate pace

Staff
Rising oil supplies and falling prices in second-half 2018 constrained global drilling, but activity should post a measured gain in 2019. Virtually all the global oil production increase is due to U.S. shale activity.

Robert Curran
A year ago, things appeared to be looking up for Canada’s oil patch, but that proved unfounded. In early 2019, more uncertainty and pessimism are in the air, and little on the horizon provides hope for improvement.
Features

Leslie Shockley Beyer
We have just left a transformational year in the industry, where shifting commodity prices and evolving drilling strategies have demanded agile thinking and ingenuity—especially in the oilfield services and equipment sector.

Jim Redden
A cooperative thermometer has lost favor as the primary gauge for measuring the economic winds of the gas-rich Appalachian basin.

Emily Querubin
The Eastern Mediterranean Gas Conference (EMGC) is gearing up for another must-attend event in Cyprus.

Qualification of a 20,000-psi subsea BOP: A collaborative approach

Daniel Kluk
To navigate continually changing HPHT design and regulatory requirements, a collaborative approach is required. The team is qualifying a 20,000-psi rated BOP. Engineers are hopeful that the HPHT design process will reach the same level of standardization as today’s 15,000-psi equipment, after completion of this and similar qualification efforts.

Australia takes the lead as top LNG exporter, but will it last?

Emily Querubin
For years, Australia’s overall production rate has been shrinking. However, according to the U.S. EIA, additional production from new condensate and crude oil developments is expected to offset the decline over the next few years.

Examining the role of outsourced service providers and external workers

Arun Srinivasan
The oil and gas industry relies heavily on external workers, in the field and in the office. A recent survey of senior oil and gas executives shows how the external workforce is sourced, managed and deployed—and how it adds value.
Columns

Kurt Abraham
The art of discussing issues in 2019

William (Bill) Head
The status of airguns and alternatives

Michele Cowart
Equinor and its partners have started production from Aasta Hansteen gas field in the Norwegian Sea.