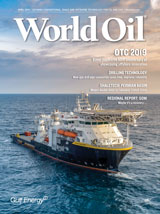 Emily Querubin
The flagship Offshore Technology Conference (OTC) is not only gearing up for another year at NRG Park (formerly Reliant Park) in Houston, but it is celebrating its 50th anniversary!

As the offshore sector of the global E&P industry shows signs of finally turning the corner, the strong pace of technical innovation is continuing.

This year’s collection of new technologies and products carries on the spirit of last year’s advances, and perhaps even more aggressively, in terms of wringing out further efficiencies and cost reductions.
Features

Mike Slaton
Shhh… Don’t scare this thing off. After four years of declining drilling activity, permits are up, rig count is up, and there is cautious optimism afloat on a bubbling current of hallelujahs.

Ron Bitto
Recent advancements in logging-while drilling and wireline logging technology have improved the industry’s ability to place wells in the reservoir, evaluate adjacent formations, and understand targeted reservoirs and the rocks and fluids that comprise them.

Jim Redden
They may have arrived late to the shale soiree, but the super-majors have shown up with overflowing wallets, lofty production targets, and they’re setting the tone for the next wave of development in the transcendent Permian basin.

Kurt Abraham
During a recent visit to Houston, Israel’s chief geologist, Dr. Michael (Miki) Gardosh, who operates within the Ministry of Energy, visited with World Oil Editor-in-Chief Kurt Abraham, providing an update on the country’s E&P sector. Activity remains solid offshore, buoyed by a current bidding round, and there also is some renewed interest onshore.

Visualizing what lies beneath: A new era for fiber optics

Don Francis
The beat goes on

Craig Fleming
Despite record production from U.S. shale fields, crude prices surged in March, with WTI and Brent up 4.5% and 2.5%, respectively.