Unconventional fracturing: Implications of particle transport through the casing

Several universities and other companies have initiated theoretical projects, attempting to better understand proppant placement in multi-cluster, limited-entry fracture stimulations. GEODynamics worked closely with a number of operators to further knowledge via large-scale surface tests. This is believed to be the first surface tests conducted, and learnings were substantial.

The first 8-cluster proppant transport surface test was executed in typical oilfield fashion, right after a torrential rainstorm, north of Pecos, Texas, in the middle of the night.

Six operators, by order of joining the project, included PDC Energy, Hess, Jagged Peak, Chesapeake, Apache and ExxonMobil. After a water-only qualification test in 5.5-in., 23#, P-110 casing, the program tested different proppant mesh sizes at ~90 barrels-per-minute (BPM) injection rates, using 1 gallon-per-thousand high-viscosity friction-reducing fluids. Eight, 13, and 15-cluster configurations, with each cluster having its own individual tank to capture fluids and proppant, were tested. Uniform equal-entry hole size charges were used, with the perforated hole size designed for ~1,500-psi differential at this injection rate.

As background, from a particle transport perspective, the group began questioning the validity of industry’s assumption that proppant and fluid travel uniformly together in the casing of multi-cluster, unconventional, fracture stimulated completions. At the very high pump rates the industry currently employs, simple math suggests that the transit time by the higher-velocity heel-side perforations is less than 0.5 milliseconds. At those velocities, will the proppant exit the casing as easily, and travel uniformly with the fluid? The team’s simple analog was “do you think a car can make a 90° exit off the freeway at 100 miles an hour?”

Fig. 1. Initial rig-up of test casing, with containment systems around each cluster, and each cluster having its own fluid and proppant capture tank. This is the start of the initial job for PDC Energy’s 13-cluster test, approximately 30 mi north of Pecos, Texas.

PDC Energy came forward, and the companies collaborated to conduct an 8-cluster, 6-shot-per- cluster test (60° phasing). Results were so surprising that the operator group was formed, and a 13-cluster, 3-shot-per-cluster (120° phasing) design (Fig. 1) showed similar results—fairly uniform fluid placement while there was a three-fold difference in proppant per cluster (in the case of 40/70 proppant). The third series of tests included both high and low flowrate tests with 15, 1-shot clusters, with both perpendicular and angled perforations all positioned on the low side of the casing.

Executing the tests at 90 BPM through 5.5-in. casing, with individual tanks collecting fluid and proppants, proved to be a difficult task, especially managing the test apparatus erosion. The group immediately recognized that the logical place to conduct these highly instrumented tests was on location, essentially rigged up as another “well” during frac operations on a pad. 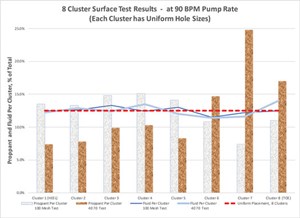 Fig. 2. From the first 8-cluster proppant transport test, the group found fluid volumes per cluster fairly uniform at ~12.5%, as indicated by the graphical lines. The 100 mesh proppant placed per cluster was reasonably uniform, as shown by the light-colored graphical bars. The heel-side high-velocity clusters received approximated one-third of the 40/70 proppant, as compared to the toe-side lower-velocity clusters, shown by the darker graphical bars.

The cover of this September issue of World Oil is a graphical rendering of the general approach: 1) Multiple frac lines from the pumps to a horizontally mounted frac head, which was connected to the 5.5-in. casing; 2) the perforated casing for each cluster was centered in individual tanks, which collected the fluids and proppant; 3) larger casing shrouds (13.625-in. and/or internally hard-banded 20-in. casing) were centralized over the perforation intervals, and rubber horse troughs diverted all the fluids and proppants into the individual tanks; 4) a bull plug ended the test assembly approximately 10 ft beneath the toe side cluster.

The collected data included real=time fluid level measurements in each tank; before-and-after sand and fluid levels in each tank; real-time pressure measurements at each cluster; before- and-after hole size measurements; individual tank sieve size analysis; and even drone videos. Pressure/rate data from the frac fleet were recorded. The slurry velocity exiting the perforations at ~ 300 ft/sec was quite erosive, when it impacted the containment equipment.

Tests in some cases were shut down when fluids ceased to be contained in the tanks. In one case, erosion occurred though the 13.625-in. casing shroud, which was centralized outside the 5.5-in. casing, through two layers of 1-in. logging chain wrapped around it and then through the outer 20-in. casing shroud. Total assembly length was in the 200-to-240-ft range, per operator requests to replicate stage length. 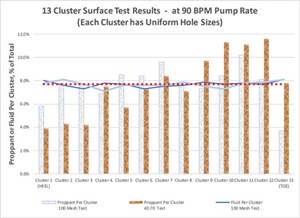 Over time, 17 different surface tests were completed; proppant sizes consisted of 20/40 and 30/50 sieve sizes on a couple of tests, but they were predominately 40/70 and 100 mesh. Both perpendicular (to the axis of the casing) and angled perforations were included in this test matrix. The program selected and utilized charges out of existing inventory to verify actual hole sizes to corresponding published data and essentially “blind tested” the charges. The group also “blind tested” acoustic fiber attached to the outside of the casing.

Results were very intriguing and will be part of technical papers that the group plans to subsequently release. It brings into question some interpretation assumptions that companies make. Likewise, before and after downhole camera hole size logging runs were conducted and interpreted as a “blind test.” The physical caliper measurements did not match the camera data as well as anticipated. The project has now moved into conducting downhole tests, based upon the surface test learnings.

The group recently decided to release some results gathered to date. It is believed that these actual physical results from the full-scale surface tests will help the efforts of industry consortiums and universities with ongoing research. A series of other technical and more detailed papers will be released.

Computational Fluid Dynamics (CFD) modeling was carried out and compared to the experimental results. A group then wrote software and developed a sand/fluid placement model, incorporating other variables.

Overall, the author and many of the participants believe the data should be interpreted, as follows:

Commenting on the graphs shown in Figs. 2 and 3, Steve Baumgartner, a long-time industry fracturing expert and project co-coordinator, summarized the results pretty simply. “With everything else the same,” he said, “there is an excellent chance one could place three-fold more 40/70 proppant in the toe-side clusters than the heel-side clusters, while the fluid per cluster is still pretty uniform. Whether it’s perforation erosion, proppant placement, proppant settling, acoustic energy or a host of other things, our industry needs to consider fluid velocity through the casing. We certainly recognize the industry’s knowledge and focus on rock mechanics, stress differentials, etc. are not in error, but the transport mechanisms through the pipe and out the perforations perhaps need more emphasis than previously given.”

About the Authors
Phil Snider
GEODynamics
Phil Snider prepared this article on behalf of all the people and operators involved in this test program. Special recognition goes to the field people, who were highly engaged. Mr. Snider is currently a completions advisor for GEODynamics, is a University of Wyoming graduate (B.S. Pet. Eng, 1979) and previously worked for Marathon Oil Company. Mr. Snider holds ~ 50 patents, and was recognized with World Oil’s “Innovative Thinker” Award in 2015.
Related Articles FROM THE ARCHIVE