Demand for curve sections with higher BURs has led to the development of the latest-generation of steerable motors with reduced bit-to-bend length. These motors have proven to be an effective and economical solution for drilling shorter curved sections in horizontal wells, in several North American basins. Overall, the short bit-to-bend motor system enables the lateral length within the production zone to be maximized while improving drilling efficiency. This is mainly because higher BURs are delivered with a smaller adjustable kick-off (AKO) angle, since the bend is closer to the bit. Improved overall directional control and more consistent BURs are the result. Moreover, this design also improves the ability to rotate the motor at higher RPMs, helping drilling performance in verticals and laterals.

A major obstacle for reducing drilling costs and improving efficiency is the need to drill many thousands of feet through various formations to reach the kick-off point. Downhole tool failures and bit damage have resulted in unplanned trips and significant non-productive time (NPT). One goal of optimization efforts is drilling through a vertical section as quickly as possible. Development of reliable and powerful positive displacement motors has been a key part of the solution.

The Williston basin encompasses portions of North Dakota and Montana, and the southern parts of Saskatchewan and Manitoba. Operators in the southern part of the Williston basin focus on the late Devonian and early Mississippian rock layers, in particular the Middle Bakken and Three Forks formations. Estimates indicate there are 5.0–6.3 Bbbl of recoverable oil held within the two formations. 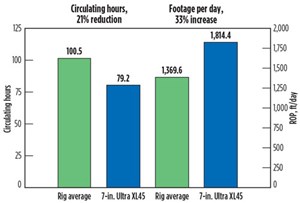 An operator engaged in pad drilling in the Williston basin was seeking improvement in drilling efficiency to drive down overall E&P costs. The biggest area for improvement was in the vertical hole sections of the wells, where operators had to change out motors and bits after drilling the softer, shallower formations before the carbonate and salts, where bits and motors saw more demanding work.

The operator wanted to drill the vertical hole section more efficiently, increasing the rate of penetration (ROP), particularly through the upper, softer formations. At the same time, a vertical trajectory was expected with minimal corrections.

The proposed solution was to deploy the new Baker Hughes 7-in. Navi-Drill Ultra XL45 motor. Nearly 45 ft long, the motor delivers unparalleled power at medium-to-low bit speeds. This improved the rate of penetration (ROP), particularly in the aforementioned upper formations.

Due to the higher power delivery in this motor, only 50–60% of maximum capacity was used, compared to more than 90% in other motors. This reduction helped increase motor life, and eliminated the need to change the motor at mid-section. Parameter guidelines were also developed to minimize torsional vibrations (stick/slip). Minimizing these damaging vibrations also drove an improvement in bit and motor life. Even when a bit change was required on longer sections, the operator still saw savings, because the motor did not need to be changed, or the stator re-lined, between runs. This also reduced trip time. 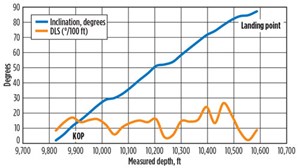 After seeing the efficiency and performance improvements, the operator decided to use the same solution for all wells going forward.

A Williston operator in North Dakota was seeking a reduction in drilling time and improvements in steering control, which were the main challenges experienced in comparable wells. In this basin, the majority of the 8¾-in. build-up (curve) sections were drilled with rates of 10–12°/100 ft. However, wells would be planned initially with build-up rates up to 14°/100 ft, a rate that would increase the reservoir exposure and reach horizontal faster.

The challenge was that standard 6¾-in. motors could not achieve the required build-up rates, mainly because the 5½-ft to 6½-ft bit-to-bend distance made directional control more difficult and limited rotation due to the required higher AKO angles. Additionally, these motors would have to be tripped, because the high AKO angle would not be appropriate to drill the horizontal sections with the directional control needed. 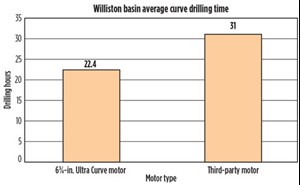 Fig. 3. The average drilling time for the Navi-Drill Ultra Curve motor was eight-plus hours less than a competing motor. Click image to enlarge.

The desired solution was to drill the curve sections, achieve the planned BURs of 10–14°/100 ft, and then continue drilling the horizontal without the need to trip and change the AKO angle. In addition, performance would be critical for drilling efficiently with the highest possible ROP.

Baker Hughes deployed the 6¾-in. Navi-Drill Ultra Curve motor with a 4½-ft bit-to-bend length. Improved results were seen immediately. The motor maintained control of the tool face while drilling the curves, delivering more consistent build rates and improved ROP throughout the section, Fig. 2.

The new motor achieved BURs of 11–18°/100 ft over 13 wells. The average drilling time with these motors was about 22 hr, beating the basin average of 31 hr experienced with similar motors, Fig. 3. 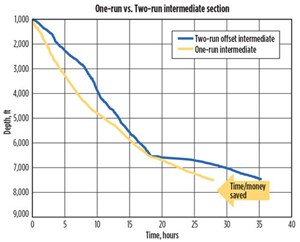 The operator had initial concerns that the AKO on Ultra Curve motors was adjustable, and not a fixed bent-housing, as seen in similar motors, and was of the opinion that only a fixed bend could achieve the required BURs. However, this motor has outperformed motors with a fixed bent-housing, and has proven to be the most consistent, best-performing motor for these applications.

The Niobrara shale covers over 5 million acres across various basins within Colorado, Nebraska and Wyoming. A customer working in the Niobrara was seeking efficiency improvements in drilling. Historically, 8¾-in. sections, which cover the vertical and curve intervals, were drilled over 6,600 ft. Total on-bottom drilling hours for both intervals averaged about 40 hr. The challenges were the need to trip to change the motor, and the limited directional control over the curve interval, leading to inconsistent build rates and more time spent in slide drilling.

The goal was to drill both the vertical and curve intervals in a single motor run and consistently deliver BURs up to 10°/100 ft. Baker Hughes deployed the new 6¾-in. Navi-Drill Ultra Curve motor because of its unique steering characteristics. The motor is designed to maintain a constant toolface while drilling curved sections. This delivers consistent BURs and an improved ROP while sliding, due to the reduced need to re-orient. A specially optimized Baker Hughes Talon 3D PDC bit was matched to the system, to achieve high ROP while drilling vertically and further enhance toolface control.