A high-performance WBM, with an innovative polymer chemistry, is exceeding operator expectations in reducing operational time and expense, compared to NAF.

The Permian basin has always been an area where new developments in the oil industry are discovered, tested and tried. The most recent success story out of the Permian resulted in an operator realizing a savings of over $80,000 per well in trucking costs; a 57.8% reduction in energy and emissions consumption; almost 10 tons of waste haul-off eliminated; and five days of drilling time saved per well, simply by switching from an oil-based mud to a high-performance water-based mud (HPWBM). 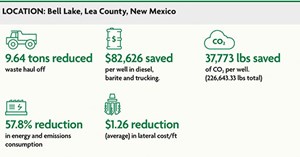 The need to improve drilling economics, efficiencies, and environmental stewardship has never been more at the forefront of the industry than now. To address these issues, an engineered approach to deliver high-performance drilling and environmental excellence was recently implemented on a series of Wolfcamp horizontal wells, using a unique high-performance water-based mud from Newpark Fluids Systems.

Located throughout the Permian basin, the Wolfcamp formation has seen crude production increase significantly over the past decade. The area is now responsible for almost one-third of the total production in the Permian basin. In addition to that, the oil and gas industry’s evolution toward clean, sustainable wellsite practices, combined with longer lateral intervals and a necessity to deliver wells faster and more economically, has created unique challenges for the drilling fluids used in well construction.

Oil and gas advances in the Wolfcamp have been the primary drivers, resulting in increased production over the past decade. In the past, development wells had been drilled with vertical trajectories but they have since transitioned to more aggressive horizontal profiles. The significant increase in crude production from the Wolfcamp is an outcome resulting from this transition toward horizontal drilling, coupled with increased lateral lengths and optimized completions.

Challenge. Non-aqueous drilling fluids (NAF) had become the fluid-of-choice for drilling Wolfcamp horizontal wells, due to apparent better performance related to increased rates of penetration and reduced torque and drag. But an increase in the amount of gas influxes, frequency and severity of lost circulation events and water flows in the Wolfcamp have increased the risks associated with use of NAF. It became clear that a better solution had to be found.

Solution. In a departure from conventional practices, the operator utilized an engineered approach to deliver high-performance drilling, coupled with environmental excellence in Wolfcamp horizontal wells through use of Newpark’s Nviros HPWBM. Use of the HPWBM resulted in improved well economics, as well as records set in drilling performance, including footage per day and days to drill the lateral sections, Fig. 1.

To start, a performance baseline was established and then used to compare the operational performance of use of non-aqueous fluids and HPWBM in the Wolfcamp wells. All the wells in the program were drilled to a similar depth, and they targeted the same Wolfcamp production zone. When using NAF, the operator was averaging 20.3 days from spud to release of the rig on a typical Wolfcamp horizontal well, averaging 1,061.2 ft/day overall, and 787.3 ft/day in the lateral section. These well metrics were comparable to offset wells drilling similar lateral lengths and production targets in the surrounding county.

Table 1. Fewer miles on the road.

The challenges of drilling extended-reach Wolfcamp shale laterals demanded a fluid that provided a high level of torque and drag reduction (lubricity), hole cleaning, along with a stable wellbore. As a result, the selection process for drilling fluids is critical to project success.

As the oil and gas industry strives for advanced standards for environmental impact, health and safety, and continually aims to reduce costs and improved efficiencies, the development and use of advanced polymer chemistry has provided an alternative to the traditional NAF systems. Previous water-based mud systems had limitations that prevented their use in certain conditions: 1) high monovalent salinity; 2) high total hardness (Ca++/Mg++); 3) produced water; and 4) divalent salinity. Newpark’s advanced polymer chemistry overcomes those prior limitations, as well as outperforming and simplifying fluid formulations.

As a water-based mud, Nviros enabled the operator to save on the disposal costs, logistics, base-fluid costs, motor realign fees, and pit cleaning expenses associated with oil-based mud. Consequently, it allowed the operator to create a greener, cleaner, and leaner operation that got them to total depth significantly faster.

Because Nviros was prepared by mixing non-hazardous materials supplied in sacks at the wellsite, it dramatically reduced the amount of drum or tote cleaning, as well as the quantity of waste destined for a landfill. It also significantly cut the number of drilling days, which in turn reduced the energy consumption and CO2 emissions from the operation.

ESG compliance. According to Newpark’s V.P. for Drilling and Completion Fluids, Billy Dye, “the Wolfcamp project was significant, because it was a direct comparison over a number of wells of a water-based mud and an oil-based mud. There were 12 wells drilled from the same rig. It was a unique opportunity, because typically, when we’re comparing water-based performance against oil-based, it’s always one being drilled with rig A, and one with rig B, or they are separated by several miles. In this instance, having the same rig, the same crew, the same drilling engineers, the same drilling foreman, and the same well profile allowed us to compare apples to apples.”

Because of the industry’s increased attention to environmental, social and governance (ESG) strategies, the use of a HPWBM is integral in complying with the operator’s plans. Ntegral is a specialized polymer that performs three critical functions: viscosity, cuttings encapsulation and fluid loss control. The number of products required to achieve the key fluid properties is simplified, and this thereby supports the operator’s safety and ESG initiatives by taking trucks off the road (Table 1) and reducing the number of lifts by rig site workers.

In addition, the polymer is innovative and unique in its ability to form a non-invasive, thin pliable filter cake, as well as its shear-thinning rheological properties. The versatile polymer lays down a thin filter cake that is highly lubricious, which reduces the risk of stuck pipe and improves drilling efficiency. The polymer also improves resistance to contamination and minimizes reactivity to calcium or divalent ions.

Make it sustainable. Newpark is advancing its sustainability position by paying close attention to environmental impacts of its products and services. One focus of this is through the increased use of plant-based chemistries that do not sacrifice performance and are characterized as renewable resources. The performance of polymers is not affected by high salinity or hardness, and their use in field brines and produced water is possible. Key performance attributes of the new polymer include: 1) multi-functional (filtration, viscosity, encapsulation); 2) plant-based, sustainable chemistry; 3) readily dispersible and easy-to-mix in freshwater or saturated brines; 4) provides non-progressive gels; 5) chemically stable to contaminants; and 6) thermally stable to 250°F in fresh water.

Less waste, less diesel. In addition to the chemical advantage, there is also a benefit from the human aspect. “From an ergonomic standpoint,” Dye said, “this is better for the workers on the rig, because there are no drums and there are fewer products to forklift around, so they aren’t inhaling diesel fumes or running the risk of back injuries. From a logistics aspect, there are less trucks on the road, which in the case of the Wolfcamp job, meant only 2,157 lb of waste to be hauled off to a landfill using Nviros, as compared to 21,450 lb, using the oil-based mud.”

From the environmental standpoint, again, in a head-to-head against NAF, using Nviros saved 37,773 lb of CO2 per well, a total of over 225,000 lb for the six wells using HPWBM. And Nviros required no diesel, while the NAF used over 104,000 gal., resulting in a savings for the operator of almost $300,000 at the then price of $2.80 per gal. of diesel, much less than today’s price, Table 2. All these things helped reduce the average lateral cost by $1.26/ft.

PLONOR validation. One of the most impressive results to come out of the Wolfcamp tests is the fact that the HPWBM chemistry and the use of Nviros has been validated as posing little or no risk to the environment (PLONOR). This acronym, as well as what it stands for, is not just an American acronym, but it is an accepted standard worldwide. And since the environmental sensitivities are greater on an international scale, the use of an HPWBM takes on a whole new world of applications from a global standpoint. “The operator we worked with in Wolfcamp said that he has always disliked the use of oil-based muds for a variety of reasons, and after the results of our head-to-head testing, he said he’s never going back to using NAF. That is a real inflection point, not only for his company, but for the industry as well,” Dye concluded.

The use of Nviros HPWBM with the new polymer chemistry exceeded the operator’s expectations in reduction of operational time and expense. Below is a summary of the results:

Michael S. Davis is senior technical manager for Newpark Drilling Fluids. He has over 25 years of experience in drilling fluids and holds a bachelor’s degree from Texas State University. Mr. Davis also has been published frequently in various industry journals.

Travis Vordick is a drilling fluids engineer and technical sales manager at Newpark Drilling Fluids. He attended Texas State University and has been published by the American Association of Drilling Engineers.