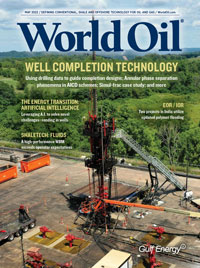 Kevin Wutherich
Existing but previously unused data obtained during the drilling process can now be used to enhance completion design. The author outlines the available data and discusses how it can be incorporated into the completion design process and ultimately provide economic benefits to an operator.

Mojtaba Moradi Michael Konopczynski
AICDs are the next generation of inflow control technology that autonomously provides a more uniform inflow profile and enhanced production. The FloSure AICD increases oil output over field life and has been deployed successfully in light and heavy oil wells to overcome water or gas breakthrough.

Subsea technology: Achieving a 99% repurpose and recycle rate during decommissioning

Stuart Nelson
Over the past decade, a subsea provider has been growing its decommissioning capabilities across the North Sea. In a project for Repsol Sinopec Resources, it achieved a 99% repurpose/recycle rate.

Michael Krause
A domain-centric approach when applying AI technologies is being used to solve issues in challenging wells.

Politicians can’t fix energy problems, but they can darn sure create them

David Blackmon
The year 2022 in Washington, D.C., is no different, where energy is concerned, than any other year, as politicians create new problems on top of old ones.

Vimal Suhag
Polymer flooding actually dates back to the 1970s and 1980s, but it is enjoying a resurgence of usage, thanks to more recent results in projects.
Columns

First Oil: End of an era for a Russian oil and gas icon

Kurt Abraham
Amidst the crush of energy, financial and wartime news, you might have missed a significant milestone within Russia’s oil and gas industry. On April 21, now-former Lukoil CEO Vagit Alekperov resigned from that company.

The Last Barrel: What a difference a war makes

Craig Fleming
The dire predictions by executives and consulting firms about the short-term/long-term effects of Covid-19 on the industry were overwhelming. The unrelenting onslaught of “we will never recover” or “nothing will ever be the same” seemed short-sighted.

Water Management: The chicken and the egg

Mark Patton
We all agree that the goal is to desalinate produced water to the point it can be reused beneficially, but there are many potential uses, each with its own inherent treatment requirements.

What’s new in exploration: Oil is still a good word

William (Bill) Head
Exploration has been occurring ever since the first family of upright humans asked “what’s over there,” deciding to move to greener ground.
Resources

Craig Fleming
Despite restricted Russian supply, due to the war in Ukraine, crude prices slipped in April. WTI dropped 6.2% to $101.78/bbl, with Brent trading at $101.78/bbl, down 13.2% compared to March. Despite lower prices, U.S. operators finally started ramping up drilling activity, which is typically the case in a high-price environment.