As multi-phase transport of oil and gas is increasingly stretched over greater distances, and access to subsea infrastructure becomes even more limited, ensuring sustainable, reliable and robust operations is vital to reducing the influence on downstream facilities.

Zohr field is in the Shorouk block, in the offshore East Nile Delta, and belongs to the Eastern Mediterranean basin. The block area is 3,752 km2, with a water depth of 1,400 to 1,600 m and is 100 to 200 km from the shore, Fig. 1. The hydrocarbon phase is a lean biogenic gas (more than 98% methane) associated with extremely limited condensate yield. The project had two phases—the offshore side and the onshore side. The offshore side consists of a high-pressure subsea structure with long-distance sea lines connected to the onshore plant. At the full development phase, there will be 20 subsea wells, and multiple gas-processing facilities. On both onshore and offshore work, the development follows three primary steps: 1) accelerated start-up (ASU) phase; 2) ramp-up to plateau (RUP) phase; and 3) plateau extension (PE). The main objective of the flow assurance strategy is to guarantee the operability of the overall production system in all normal operations, and to provide suitable solutions for expected scenarios that can deviate from normal operating conditions. 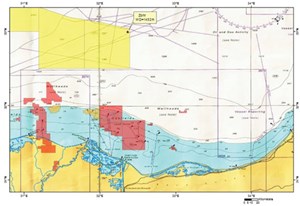 For extra-long pipelines, such as those used for Zohr, especially for the multi-phase lines, having the bathymetry available minimizes the risk of errors during the field matching stage. The bathymetry will also affect the liquid distribution, and pressure drop calculations. The bathymetry is also used to ensure the developed model represents the real system without oversimplifications. The system developed is discretized in sections, each of them will identify a “node” within which the scalar quantities, such as pressure, temperature and hold-up, are considered to be constant. The vector quantities, such as the velocities of the single phases, are defined in the sections that separate one node from another. Boundary conditions for reservoir, pumps and separators must be considered, both for selection and for the definition of a development scenario, with obvious differences in description detail.

Theoretically, the operation of “nodalizing” a real system represents the passage from a continuous system to a discrete one. In practice, the set of raw data relating to a transportation system is already a discrete set obtainable from topographic surveys (or bathymetric surveys, for offshore lines) or as-built drawings. Therefore, the first control that must be made is to verify that the initial set of geometric data is sufficiently detailed to accurately reproduce the fluid dynamics of the system.

Zohr bathymetric surveys involve more than 200,000 discrete data points to describe the deep inclinations along the line. The real challenge at this stage of modeling is to reproduce the line profile with a reasonable number of nodes. It is to the code user’s advantage to make nodalizations with the smallest possible number of nodes, since the computer time in a run is approximately proportional to the square of the number of nodes. Certain criteria were defined to ensure minimizing computation time would not affect the quality of model predictions. 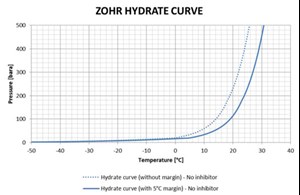 Hydrate management. High plugging risk locations are downstream of the surface-controlled subsurface safety valve (SCSSV), the production choke, low spots in a flowline where water accumulates, and at the foot of a riser. Hydrates are the main driver of the flow assurance strategy of almost all projects, because they are the only solid with the potential to form a blockage in minutes.

Hydrate management in Zohr field is aimed at avoiding all hydrate formation in the subsea production system during all field operations, from steady-state to transient operations, Fig. 2. This is accomplished by continuous injection of a thermodynamic hydrate inhibitor (THI) (using a monoethylene glycol [MEG]) to shift the hydrate formation curve. In case of a hydrate blockage, hydrate remediation is performed by using dual-sided depressurization to move the system outside of the hydrate stability region and dissociate the hydrate plug in a safe and controlled manner. The objectives of the hydrate management workflow are: 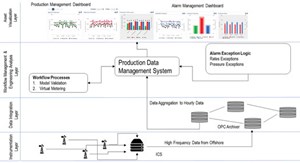 To overcome the fact that the first ten wells are not equipped with flowmeters, a virtual metering system (VMS) was used, Fig. 3. The virtual flow metering (VFM) solution is a model-based flowrate estimator that calculates three-phase flowrates at the wellhead location. The VFM is independent of the physical wet gas meter, with the results reconciled toward fiscal metering topside/onshore.

These fluctuations can be particularly significant when they occur as “severe slugging,” i.e. the sudden arrival of liquid slugs over a short time, followed by a period of the arrival of gas only, resulting from the cyclic occlusion of the flowline cross-section by liquid. A dynamic simulator is used to determine the operating envelope, where it is crucial to operating the system. During the ASU phase until the early RUP phase, no, or relatively low, produced water is expected. Medium-to-high free water cases are expected for the mid-RUP phase until the end of the production life.

Nevertheless, a higher tubing pressure drop is expected in relation to the higher well free water flowrate. The maximum allowable total gas flowrate is governed by the maximum allowable pipeline operating pressure, which at an inlet export pipeline or inlet service pipeline is around 250 bara, with the high-integrity pressure protection system (HIPPS) set point at 270 bara (for ASU and optimized ramp-up (ORU) wells).

The maximum allowable total production gas flowrate for production, via the 26-in. nominal pipe size (NPS) export pipeline in target condition, is expected to be around 1,160 MMcfgd with the maximum total free water flowrate at around 300 STBD for any climatic conditions (winter or summer), and the arrival pressure around 84 bara. A minimum recommended turndown gas flowrate is considered when total liquid accumulation in the system is around 10% of the volume pipeline.

The minimum recommended total production gas flowrate for production, via the 26-in. NPS export pipeline prior to the ramp-up or restart operation, is 350 MMcfgd with a maximum total free water flowrate around 300 STBD for any climate conditions (winter or summer), with the arrival pressure around 84 bara.

Restart operations—resuming production after a shutdown. The high liquid hold-up in a pipeline also occurs when operating in turn-down conditions, hence, the surge generated by ramp-up operations can be significant. The lower the turn-down flowrate, and the longer the turndown rate is maintained, the higher the liquid accumulation is in the pipeline. In addition, the more rapid the ramp-up rate, the higher the amount of liquid surge is expected to arrive onshore. Surge characteristics (mainly the peak flowrate and associated duration) are affected by the duration of the ramp-up operation from turn-down flowrate to nominal flowrate. Rapid ramp-up (fast production choke valve (PCV) opening) serves to minimize the ramp-up duration. However, it tends to maximize the peak surge rate and overall volumes that the slug catcher must manage.

In general, pigging is expected to be the worst case for liquid surge rates arriving onshore.

During pigging operations, most of the liquid accumulation is received simultaneously at onshore arrival (significant liquid surge with a high liquid flowrate peak), resulting in a high surge volume. Also, attention has to be paid to limit the surge volume, especially during restart operations for mid- to end-of-life periods, as liquid accumulation in the pipeline before such operations is expected to be exceedingly high. As long as appropriate restart and ramp-up procedures are followed, no significant surge volumes are expected at onshore arrival during restart and ramp-up operation.

Results. Hydrate prevention is a crucial element of operations at Zohr field. Over the life of the field, up to 3,500 tons/day of MEG are currently envisaged to be injected subsea to inhibit the production fluids against hydrate formation. Better understanding of the hydrate inhibition requirements, along with better monitoring and control of the inhibitor dosage at each well, can result in significant OPEX savings. The available MEG dosage is compared to the dynamic model’s minimum required dosage and the under- or over-dosage calculated. An adjustment in flowrate is suggested to achieve optimized MEG consumption.

The solution implemented by PETROBEL and Schlumberger is based on a combination of virtual metering system (VMS) and MEG optimization, which resulted in reducing the OPEX. The VMS can predict the changes in flowrates quickly, hence the required dosage can be optimized more frequently. If the decision is based on the onshore meter, there will be a lag, due to long tie-back. By adopting the modeling approach, MEG optimization lowered the injected dosage 8%, compared to the results of calculations made using Hammerschmidt’s equation.

The developed model has shown its efficiency when responding to current Egyptian regulations to increase gas production, due to increasing local demands. The initial design of Zohr’s production system, with its current operational strategy, would not be able to handle the increase in back pressure, and risk of system shutdown was identified. The shutdown would have cost estimated minimum losses of 400 MMcfgd to 600 MMcfgd.

Using the developed model to adopt a new strategy that considers the HIPPS maximum allowable pressure, Zohr management was able to avoid those losses and accommodate new government requirements. The Zohr team have a dynamic model that enables them to predict system performance and, hence, dynamically change their strategy, based on new requirements or changes in operational conditions.