In Alaska, producers added 259 MMbbl of proved oil and lease condensate reserves in 2019, the largest net increase of all states. Most reserve additions were made on the North Slope. In New Mexico, producers experienced the second-largest net increase in proved reserves of crude oil and lease condensate during 2019 (226 MMbbl), and Texas had the third-largest (179 MMbbl). The New Mexico reserve additions and most of the Texas reserve gains were made in the Permian basin, the center of the Wolfcamp/Bone Spring shale play. Operators in Ohio had the fourth-largest increase in proved oil reserves (106 MMbbl) in 2019—an increase of 50.5% from 2018. The largest net decrease in proved reserves of crude oil and lease condensate among all states during 2019 was in Colorado (-154 MMbbl). 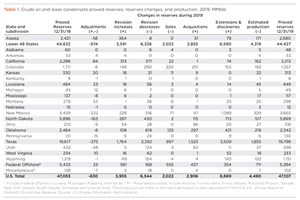 Proved reserves are estimated volumes of hydrocarbon resources that analysis of geologic and engineering data demonstrates with reasonable certainty are recoverable under existing economic and operating conditions. Reserves
estimates change from year to year, as new discoveries are made, as existing fields are thoroughly appraised, as existing reserves are produced, as prices and costs change, and as technologies evolve. 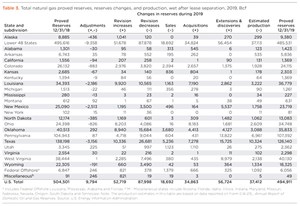