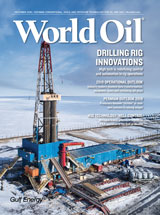 An Internet of things turns to the right

Mike Slaton
Control and automation are long-time centers of gravity for rig innovation. But high tech is redefining both with remarkable advances in safety, efficiency and operational capabilities.
Features

What industry leaders expect for 2019

Apache founder Raymond Plank was one of a kind

Kurt Abraham
When Apache founder and former Chairman Raymond N. Plank passed away at his Ucross, Wyoming, home on Nov. 8, at the age of 96, it marked the departure of one of the U.S. oil and gas industry’s last truly larger-than-life figures.

Permian producers become "victims of their own success"

Emily Querubin
Despite a few recent snags, Permian basin production should continue its upward trend through 2019.

Odis Baxter Allen Rollins
A difficult P&A operation in the GOM was halted, due to a casing part below the slips. Inspection revealed damage so extensive, that further operations or well entry were impossible without changing the BOP for a larger-diameter version. Gas was also emanating from the wellbore, which required a barrier. To solve the problem and reduce NPT, a novel nitrogen freeze technique was employed.

David Blackmon
Potential two-year gridlock in the U.S. Congress following the mid-term elections may be a good thing for the domestic oil and gas industry.

Emily Querubin
Since the beginning of the U.S. shale revolution, circa 2003, producers have been drawn to the value of the nation’s copious onshore resources.

Jim Redden
Despite both production and seasonal gas prices at multi-year highs, asset-holders in the Haynesville and Bossier shales are sending mixed messages as to the breadth of the supposedly percolating recovery.
Columns

Jim Redden
Sleepless in the Gulf

Tracee Bentley
Colorado’s debate begins a national struggle: Your state could be next

Craig Fleming
Industry at a glance

Michele Cowart
People in the industry

Michele Cowart
Companies in the news