(WO) — Zephyr Energy Plc, the Rocky Mountain oil and gas company focused on responsible resource development and carbon-neutral operations, announce on Monday that drilling operations have commenced on the State 36-2 LNW-CC well at its flagship project in the Paradox Basin, Utah. 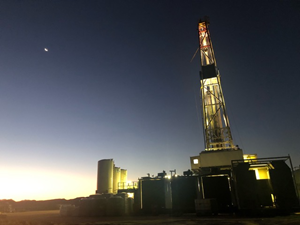 "The commencement of drilling of the State 36-2 LNW-CC well is another landmark moment for the company in its pursuit of unlocking the significant potential upside value from the Paradox project,” Colin Harrington, Zephyr’s CEO, said. “While Zephyr’s primary objective for the well is to target production from the Cane Creek reservoir, we also plan to use the drilling operation to acquire important additional data from overlying reservoir targets.”

Over the last week, CWC Ironhand Drilling Rig 118 mobilized to the well-site, where it was subsequently assembled and tested. In addition, all necessary ancillary service providers arrived on site to support drilling operations.

The fully funded well will target the Cane Creek reservoir, and drilling is planned to a total depth (TD) at 20,456 ft measured depth (9,598 feet true vertical depth) incorporating a 10,346 feet horizontal reservoir section. The well's objective is to further delineate the Cane Creek reservoir beyond the productive State 16-2 LN-CC well and the nearby Federal 28-11 well (which was recently acquired by Zephyr and is currently shut-in due to infrastructure constraints, details of which were announced by the company in September 2022).

Drilling operations are expected to take approximately 30 days. After reaching TD and dependent on schedule and availability, a completion crew will subsequently be mobilised by the company to hydraulically stimulate the horizontal portion of the well, immediately after which production testing shall commence.  Further updates will be provided in due course.