(Bloomberg) — Germany moved to nationalize a second major gas company in two months as Berlin seeks to secure supplies for the winter and contain the financial shock from Russia’s squeeze on European energy. 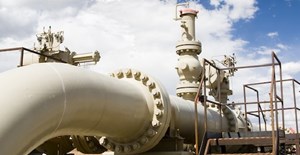 The takeover of SEFE Securing Energy for Europe GmbH, the former European trading and supply unit of Gazprom PJSC, is necessary to prevent a collapse that could set off a chain reaction through the economy, forcing factories to shut down and households to go without heat. SEFE is a central distributor for commercial and residential users.

The government will take a 100% stake in SEFE – formerly known as Gazprom Germania – and increase its loan to the company to €13.8 billion ($14.2 billion), the Economy Ministry said Monday. The step was required because SEFE’s over-indebtedness and the threat of imminent insolvency would “endanger the security of supply in Germany,” the ministry said.

In September, the government said it would nationalize Uniper SE, the biggest gas importer. The utility accumulated more than €8 billion in gas-related losses when prices for alternative sources soared, prompting the largest bailout in German history.

The moves are part of a €200 billion package the government put together to help companies and households cope with rising energy prices. Europe’s biggest economy faces a potential collapse of its energy sector after Russian President Vladimir Putin started restricting gas flows following the invasion of Ukraine.

The public costs of these rescues likely will soar after Uniper reported a net loss of about €40 billion in the first nine months of the year, one of the biggest losses in German corporate history.

SEFE has been under German trusteeship since Gazprom cut off the unit in April. According to its October earnings report, SEFE had an equity capital of €1.03 billion and net losses of €2.07 billion. The situation has not improved since then, according to the government announcement.

Adding to the mounting pressure, SEFE is locked in a legal standoff with commodities giant Vitol Group, which is threatening to halt gas deliveries in a move that could cost the German company about €1 billion.

The government will inject equity capital of €7.7 billion into the company. This will be done via a debt for equity swap. The European Union still has to approve this injection. The European Commission on Saturday approved €225.6 million of German aid to support SEFE and safeguard the security of the nation’s gas supplies.

Russia can’t stop the takeover, but it could sue in German courts.

SEFE’s foreign affiliates – especially in Singapore and the UK – are absorbing significant losses under their long-term supply contracts.