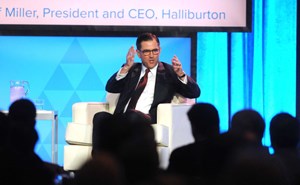 HOUSTON (Bloomberg) --Halliburton Co., the oil and gas industry’s largest frac services provider, is gearing up for several years of expansion in both the U.S. and foreign markets as spending recovers in the global energy industry.

“The positive activity momentum we see in North America and international markets today, combined with our expectations for future customer demand, gives us conviction for an unfolding multi-year upcycle,” CEO Jeff Miller said in a statement Tuesday.

The Houston-based contractor rose as much as 2% in pre-market trading Tuesday after reporting better-than-expected second-quarter earnings. The bullish commentary from the world’s No. 3 oil-services provider follows comments last month from its largest rival, Schlumberger, which said the global economic recovery will trigger an energy-industry “supercycle” that should lead to wider margins.

That represents a dramatic rebound for the sector, which was laid low last year by the pandemic and forced to lay off tens of thousands of workers. The three biggest companies -- Halliburton, Schlumberger and Baker Hughes Inc. -- all report earnings this week and are expected to boost profits by at least 20% compared with the first three months of the year, according to an average of analysts’ estimates compiled by Bloomberg.

“The margin performance that buoyed results should be enough to drive relative outperformance for Halliburton today, pending the company’s outlook commentary,” analysts at Tudor Pickering Holt & Co. said Tuesday in a note to investors. “We’ll be listening for international revenue outlook commentary as COVID-19 has, yet again, begun to impact certain international regions.”

Oil-services providers haven’t seen three straight quarters of share appreciation since the days of $100-a-barrel crude back in 2014. Now, as drilling accelerates around the world, the Philadelphia Oil Service Index is showing just that.

Miller, who slashed more than $1 billion in costs during the downturn, three months ago forecast double-digit year-on-year growth in international orders during the second half of this year. Closer to home, he left investors disappointed with a more subdued outlook for the North American market.

The shares have eked out a 2.4% gain this year as of Monday’s close, after four consecutive annual losses that saw the company’s market value cut by more than half. The stock has 16 “buy” recommendations among analysts, compared with six “holds” and three “sells.”

Among its largest peers, Halliburton is most dependent on North America, where it generates roughly 40% of sales. Fracking in the U.S. is expected to grow 7% in the current quarter before erasing those gains by the final three months of the year, according to Goldman Sachs. Explorers are forecast to boost spending by 20% next year, the bank said last week in a note to investors.

Exploration and production spending is widely seen as a proxy for future crude output because the budgets cover everything from drilling new holes in the ground to fracking and completing the wells for oil to flow.