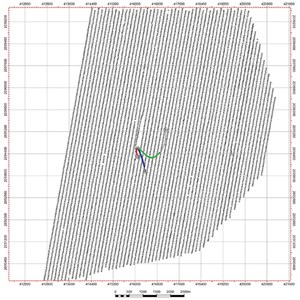 Fiber deployment over tubing, such as the case in the present study, often results in noisier data, due to suboptimal receiver coupling conditions. The noise issue is further exacerbated if data are recorded while wells are under flowing condition. Moreover, fiber deployment in highly deviated wells also causes severe receiver directivity footprint, which needs to be addressed in processing. All these factors impose considerable challenges to processing of the data acquired under such conditions, as the case with the present study.

The survey consists of over 10,000 shots recorded by fiber in four wells. The data are acquired in a grid pattern with shot spacing of 50 m and line spacing of 125 m. Figure 1 shows the source and receiver locations. The colored dots are receivers, and empty circles are sources. In the present study, we show the results from a single well with receivers represented by green dots.

Quality of acquired data is quite variable. The well deviation improves fiber coupling, resulting in higher signal-to-noise ratio than observed in vertical wells with similar fiber deployment. Production noise is present on all wells; however, amplitude of this noise varies over time, as well as over receiver depths. 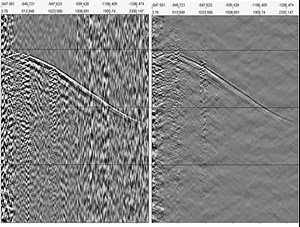 Production-related noise was dominant in lower frequencies (up to 35 Hz) and was spread over a range of velocities in the shot domain. Tau-p and an FX infinite impulse response dip filter were used to remove the very low velocity components of this noise. A tau-p domain denoise was also done to attenuate constant velocity noise by algorithmically identifying and suppressing the anomalous amplitude values in this domain.

A shot-by-shot source signature deconvolution was applied to debubble, deghost and zero-phase the signal. Far-field signature for this operation was computed from the near-field hydrophone for each record.

A shot domain scaling by 1/p values was applied in Tau-p domain.5 (Sayed et al., 2020). This step effectively provides amplitude-only DAS to velocity scaling. For example, common receiver gather, before and after scaling, is compared in Fig. 3. It can be seen from this figure that scaling by 1/p improves amplitude balancing on either side of the minimum offset location. 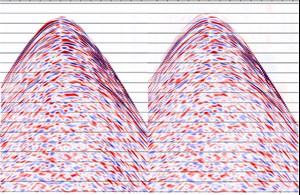 The data are NMO-corrected by ray tracing through a 1D-velocity function, extracted from an isotropic PSDM velocity model at the wellhead location. The NMO-corrected data are then sorted in receiver domain. When such data are analyzed along or orthogonal to the shooting direction, several parabolic events are identified with their origin at the zero-offset location. A three-dimensional parabolic Radon transform (3D PRT) is used to model these events. 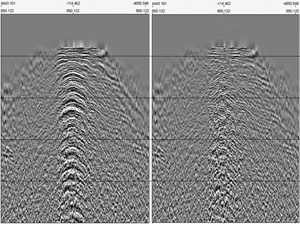 The modeled coherent noise through this process is further isolated by curvelet transform before adaptively subtracting from the data. The parameters for this 3D PRT transform are carefully selected for signal protection and are varied with receiver depth. For example, NMO- corrected common receiver gather from the near-well location line, before and after 3D PRT denoise is shown in Fig. 4.

The data after this step are regularized to a 50-m × 50-m grid through a 4D matching pursuit Fourier interpolation (4D MPFI) algorithm. This step further attenuates the production noise that, due to its time-variant nature, remains incoherent in receiver domain. Following this step, NMO correction is removed. Examples of common shot and common receiver gathers of raw and processed data after this step are compared in Figs. 5 and 6, respectively. As a final spectral shaping step, a bandwidth extension algorithm is used to enhance amplitudes, both on lower- and higher-end of input spectra. 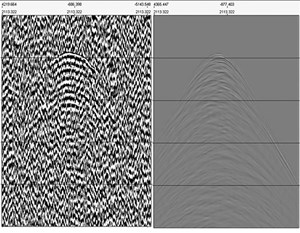 The fiber directivity-corrected receiver subgroup image volumes are processed through an interpretation-guided selective stacking process, where each image volume is decomposed into several 3D dip components. These dip components are weighted with respect to the background dip field and restacked. This reduces migration smiles while retaining spatial resolution. 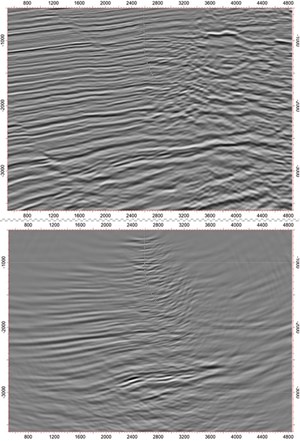 The image volumes are then sorted into VSP common image point gathers (VSP-CIP gathers), and residual or trim statics are applied before stacking by a nonlinear stacking process. To reduce the amplitude differences, due to illumination, a weight cube produced by ray tracing is applied to the RTM stack. Near-well PSDM and DAS 3DVSP images are compared in Fig. 8. Similarly, two depth slices close to the reservoir interval are shown in Fig. 9.

A DAS 3DVSP survey recorded in very challenging data acquisition conditions is handled through a rigorous processing sequence to yield high-resolution, relative amplitude friendly subsurface image volume. It is demonstrated that through careful processing, DAS data acquired in a high-noise, producing well environment, can yield excellent-quality images with improved resolution in comparison to surface seismic. This case study is relevant to the oil and gas industry because most wells completed with fibers are either injectors or producers. The ability to handle the high flow noise is key for successful seismic monitoring projects using DAS data. 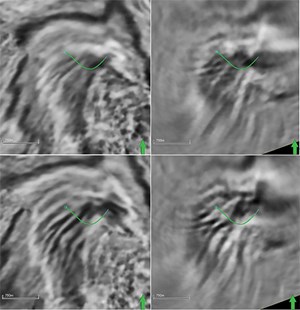 The authors would like to thank Eni and Schlumberger for permission to publish the results, and Eni for the data release.

About the Authors
Francesco Miranda
Eni
Francesco Miranda has more than 20 years of oil and gas experience in the subsurface domain. He is the technical leader for borehole seismic for Eni. Throughout his career, he has held various technical and leadership positions, specializing in borehole seismic feasibility, processing, and interpretation and surface seismic processing, interpretation, seismic attributes, and seismic inversion. Mr. Miranda also has experience with R&D studies in seismic while drilling and geosteering. He holds a Doctor of Philosophy in geophysics from UC Swansea, UK.
Emmanuel Spadavecchia
Eni
Emmanuel Spadavecchia is the borehole seismic manager for Eni. He has nearly 10 years of oil and gas experience in the subsurface domain. Prior to his current role, he was a senior geophysicist at Eni, where he was project leader for in-house projects, and he also supervised outsourced projects. Mr. Spadavecchia holds an MS degree in Digital Signal Processing and a BS degree in Telecommunication Engineering from Politecnico di Milano.
Shujaat Ali
Schlumberger
Shujaat Ali has more than 20 years of borehole seismic experience in both technical and leadership positions, and is an expert in 3D VSP processing. He is the team lead for the Schlumberger North America Land borehole seismic processing group. Prior to his current role, Mr. Ali held several positions, including geophysicist for the 3D VSP Center of Excellence in Houston, and lead geophysicist for Kuwait, UAE and Pakistan. He specializes in borehole seismic survey design, acquisition, processing and imaging, and has experience in advanced analysis of borehole seismic data for anisotropy, AVO, and full waveform inversion. Mr. Ali holds an MS degree in geophysics from Quaid-e-Azam University, Pakistan.
Roberto Castañeda-Aguilar
Schlumberger
Roberto Castañeda-Aguilar has nearly 20 years of oil and gas experience in the subsurface domain. He is a geophysicist for Schlumberger, specializing in seismic interpretation and borehole seismic processing. From 2013 to 2017, Mr. Castañeda was involved with the Schlumberger Innovation Center in Salt Lake City, Utah, where he conducted research into new workflows for unconventional reservoir characterization. His main technical interest is quantitative analysis in exploration and reservoir characterization. He holds a BS degree in geophysical engineering from the National Polytechnic Institute of México (IPN).
Related Articles