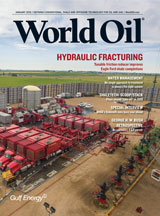 Joshua Hedrick
From paper to paperless, RFID and IoT are transforming the tracking of enormous amounts of iron that connect the pumps to the wellbore for hydraulic fracturing. The efficiency gains are significant.
Features

Closing the loop on water treatment

Dr. Clay Maugans
There are numerous approaches to treating and recycling water in the oil field, with no single approach always being the right answer.

Kurt Abraham
The former President’s tenure in the U.S. upstream industry was just as exemplary as his later career in public service.

John Gellert
In recent years, the offshore vessel industry has hit an inflection point that has forced providers to find more cost-effective, realistic means to operate during a frustratingly slow recovery process.

Kurt Abraham
In an exclusive interview with World Oil Editor-in-Chief Kurt Abraham, Baker Hughes, a GE company Chairman and CEO Lorenzo Simonelli lays out his vision for the company’s future.

Matthew Chinn Mirko Wutkewicz
Artificial intelligence may seem like a solution in search of a problem, but an on-line retailer has used it since 2006, helping to grow sales by 1,600%. It’s now being applied in oil and gas operations, and it added value in an E&P pilot program with 30 electrical submersible pumps.

Manage by exception: a practical way to reduce cost and improve performance

David C. Johnson
With a few considerations, today’s data-centric workflows can be enhanced with the introduction of MBE, reducing risk and cost.

Jim Redden
As it prepares to set up shop in Oklahoma’s flagship shale plays, Encana Corp. is experiencing a measure of deja vu.

Taking the “hurt” out of running casing

The state of process safety and operational risk management

Simon Jones
A 2018 survey report reveals how senior leaders perceive operational risk and process safety management, as well as the work that must be done to turn positive intent into action with proven business benefit.
Columns

William (Bill) Head
Sometimes it is ok to be wrong, even very wrong

Mark Patton
May you live in interesting times

Craig Fleming
Industry at a glance

Michele Cowart
ABB has been awarded an integrated automation, electrification and telecommunication project, valued at $79 million, for the upgrade of Bab onshore field in Abu Dhabi, by CPECC.