(Bloomberg) — New British Prime Minister Liz Truss removed a ban on drilling for shale gas, an effort to boost domestic energy supply that will have to overcome the same obstacles that stymied the industry for the past decade. 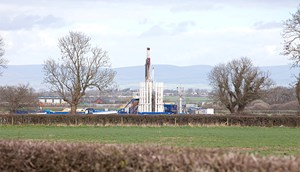 The lifting of the moratorium on so-called fracing was part of a package of measures announced on Thursday to tackle soaring energy prices that are hammering households and businesses. Even with the renewed government support, the shale gas industry still faces an uncertain road, with significant opposition from local communities and challenges related to the country’s geology.

Earlier this year, the UK’s meager fracing industry faced its last rites. Cuadrilla Resources Ltd., the company behind the country’s first major shale gas discovery in 2011, was poised to plug and permanently abandon two exploration wells in Lancashire. But Russia’s invasion of Ukraine handed the firm a reprieve as the regulator withdrew the order to close the wells and the government of former Prime Minister Boris Johnson considered whether to allow a restart of drilling.

“It is vital we take steps to increase our domestic energy supply,” Truss said in parliament. “We will end the moratorium on extracting our huge reserves of shale that could get gas flowing in as soon as six months where there is local support for it.”

That local support may be hard to find, given the vehement local opposition that has accompanied any attempts to drill for shale gas in the past decade. Residents worried about the risk of earthquakes or the disruption from fleets of trucks carrying equipment and workers, plus campaigners opposed on climate grounds, have frequently halted the industry’s operations. Only 17% of people in the UK support fracing, according to a government survey conducted last year.

“Before the fracing moratorium, the industry had ten years of the government ‘going all out for shale’ and giving them all the support denied to onshore wind,” said Georgia Whitaker, oil and gas campaigner for Greenpeace UK. “In that time, the fracers produced no energy for the UK, but managed to create two holes in a muddy field, traffic, noise, earthquakes and enormous controversy.”

“We’ve got the wrong kind of shale in the UK,” said Jon Gluyas, director of Durham University’s energy institute. “We will get some shale gas out, but it won’t scale in the same way” as the US, he said.

There are a few key differences between the rocks below Britain and those in America’s Permian Basin. The best performing shale reservoirs in the US are found in rocks that are largely silica-based. That allows for the drilling of sturdy wells that will last a long time. In the UK, the ground is made of clay that won’t hold a fracture for as long.

Also, the rock in the US is uniform over large tracts of land, but in the UK can vary widely below the surface, making it impossible to replicate techniques quickly and ramp up production, he said.

A better solution for boosting UK gas production may lie in the North Sea, where industry has been extracting energy for decades and there are still plenty of resources left, Gluyas said.

Truss said her government will proceed with an offer of new North Sea exploration licenses announced earlier this year, with more than 100 new permits available.

The focus on fracing and licensing shows the Truss government’s focus on increasing supply,  rather than limiting demand by funding energy-saving measures like home insulation.

“There is a real danger of the government serving up a red herring with local communities likely to oppose fracing rigs while focus is diverted from efficiency and renewables,” said Jess Ralston, senior analyst at the Energy and Climate Intelligence Unit. “All the experts and even the industry agree more UK gas won’t bring down British bills.”

Earlier this year when he was business secretary in Johnson’s government, Chancellor of the Exchequer Kwasi Kwarteng said fracing wouldn’t solve the energy crisis.

“Even if we lifted the fracing moratorium tomorrow, it would take up to a decade to extract sufficient volumes -- and it would come at a high cost for communities and our precious countryside,” Kwarteng wrote in the Mail on Sunday newspaper in March. “No amount of shale gas from hundreds of wells dotted across rural England would be enough to lower the European price any time soon.”