(Bloomberg) — Pakistan State Oil Co., the nation’s largest fuel importer and retailer, is planning to build a $500 million LNG terminal as part of its strategy to diversify into multiple businesses. 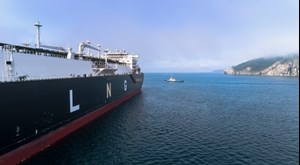 The import terminal will be located near Karachi and would take four years to complete, Chief Executive officer Syed Muhammad Taha said in an interview. The company has an understanding with a few large customers and has begun preliminary preparations for the project that will include Pakistan’s first LNG storage facility, he said.

The South Asian nation has been one of fastest-growing markets for liquefied natural gas, which it mainly uses to generate electricity, after a decline in local production over the last decade. But surging prices, spurred in part by Russia’s war in Ukraine, have seen it struggle to afford the fuel this year, resulting in frequent blackouts.

“As long as there’s a geopolitical crisis in place, prices will remain elevated, but eventually it will come down,” Taha said in Karachi on Friday. “As soon as the prices are conducive we’ll go ahead.”

Pakistan State Oil, which owns a network of 3,500 service stations and is the country’s largest company by revenue, may look for a partner for the project, Taha said. He didn’t offer exact details on the size of the project, whether it would be onshore or floating, or when it might be in operation by.

The country currently has two floating LNG import terminals, both near Karachi. Qatar and Mitsubishi Corp. have also said they plan to invest in terminals in Pakistan.

The country has been hit hard by the surge in fuel prices this year, and is now also dealing with catastrophic floods that have been worsened by climate change. It secured a bailout from the International Monetary Fund late last month, but had to agree to increase domestic fuel prices to get the funding.

Pakistan State Oil expects demand for gasoline and diesel to fall 5% to 7% in the year started July, and doesn’t plan to buy any more fuel oil over the period, Taha said. The government is in discussions with Middle Eastern countries on long-term deals that will satisfy about 80% of its imported gasoline requirements, he said. Pakistan already has these types of arrangement for LNG and diesel.

The fuel retailer is also planning to apply for a license to become a mobile wallet operator, and eventually start a digital bank, Taha said, adding that it’s allocating 1 billion rupees ($17.4 million) to set up a venture capital fund.

“So going forward our objective is very clear. We want to venture into different areas.”