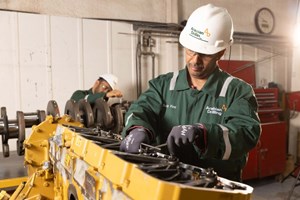 The firm will sell 26.7 million shares, or a 30% stake, in initial public offering, according to a statement. The offer price will be determined following a book-building period from September 28 to 5 October 5.

About a third of the IPO will be new shares, and the proceeds will be used to scale up onshore and offshore fleet and expand operations in the Gulf Cooperation Council region, it said. Arabian Drilling operates 45 rigs and had revenue of $586 million last year. It also has an order backlog of $2.2 billion.

“We are in a period of unprecedented growth for Arabian Drilling -- oil prices are up, demand for energy is high and we are growing,” Chief Executive Officer Ghassan Mirdad said in an interview. “We have a clear strategy for growth, in Saudi or outside, and this needs a lot of funding.”

Investor appetite for Saudi listings remains strong, though a rally in Middle Eastern equities has faded over the past few months as fears of recessions gripped global markets. Saudi Arabia is home the Middle East’s biggest stock market and saw 10 IPOs in the past 12 months, raising a combined $6.55 billion, according to data compiled by Bloomberg.

Arabian Drilling could be valued at more than $1.4 billion, people familiar told Bloomberg in April. The company was founded in 1964 and counts Saudi Aramco, the kingdom’s state energy producer, among its main customers.

The company is looking to capitalize on Aramco’s plans to significantly boost its oil and gas production, while also expanding its operations in the Middle East and eyeing potential acquisitions, Mirdad said.