(Bloomberg) — Secretary of State Antony Blinken said it was ‘unlikely’ the U.S. and Iran would reach a new nuclear deal anytime soon, adding to Western officials’ downbeat assessment over the prospects for reviving an accord that President Donald Trump abandoned in 2018. 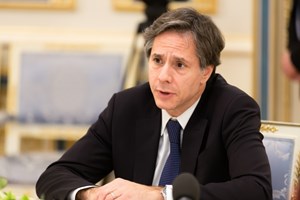 “What we’ve seen over the last week or so in Iran’s response to the proposal put forward by the European Union is clearly a step backward and makes prospects for an agreement in the near-term, I would say, unlikely,” Blinken told reporters at a press conference in Mexico City.

“Iran seems either unwilling or unable to do what’s necessary to reach and agreement and they continue to try to introduce extraneous issues to the negotiations that make an agreement less likely,” Blinken said.

The top U.S. diplomat’s comments added to growing pessimism that the sides will be able to bridge their differences over the European Union proposal, which was introduced in an effort to break a deadlock after months of indirect talks between the US and Iran proved fruitless.

An inquiry by the International Atomic Energy Agency into Iran’s past nuclear activities has taken center stage in the talks to resuscitate the 2015 agreement, where success could unleash a surge in Iranian oil exports. The IAEA’s 35-member board of governors convened Monday in Vienna to discuss the standoff and heard a gloomy assessment from Director General Rafael Mariano Grossi

“The information gap is bigger and bigger,” Grossi said at a press briefing, adding he still expects Iran to cooperate in his inquiry.

Iran is demanding the IAEA investigation into suggestions of nuclear activities at undeclared sites be terminated before it starts to dismantle a program now enriching uranium just below the levels needed for weapons. The US and other world powers have offered sanctions relief if the Islamic Republic curtails nuclear-fuel production, but they insist that it’s up to the IAEA to declare an end to the investigation.

The governments of France, Germany and the UK issued a joint statement on Saturday addressing the latest demands from the Islamic Republic.

“In light of Iran’s failure to conclude the agreement on the table, we will consult with our international partners on how best to deal with Iran’s continued nuclear escalation,” the European governments said.

Very untimely indeed. Right at a critical moment at the #ViennaTalks and on the eve of the session of the #IAEA Board of Governors. https://t.co/BrlMNiinza

“There is really no reason now for Iran not to agree to these proposals,” German Chancellor Olaf Scholz said Monday. “But we must recognize that this is not the case and so it certainly won’t happen anytime soon, even though it appeared that would happen for a while.”

As European hopes dim for an immediate return to the agreement, Iran’s leadership is focusing on the region. President Ebrahim Raisi is expected to meet his Chinese and Russian counterparts at a meeting of the Shanghai Cooperation Organization that convenes on Thursday in Uzbekistan.

Even if Iran and world powers manage to clear the final obstacles toward reviving the accord, the IAEA’s Grossi warned the amount of time his inspectors will need to verify compliance has grown.

“The reality is that it is going to be extremely difficult and we will have to work very hard and Iran will have to be very transparent,” he said. “There’s a lot of homework to do.”

Talks to rein in Tehran’s nuclear activities in exchange for easing sanctions, including those on oil exports, have been on a knife’s edge since European negotiators proposed a final 25-page draft agreement after almost 18 months of negotiations.

After early signals that a return to the JCPOA could be days away, the sides are now resigned to more delays, dragging out talks and preventing Iran from ramping up its sales of crude.

The nuclear deal unraveled after Trump withdrew the US in 2018 and reimposed sanctions. In response, Iranian officials expanded the country’s nuclear program.

Israel’s Prime Minister Yair Lapid welcomed the deadlock after meeting leaders of Germany’s government on Monday in Berlin. “Returning to the nuclear agreement, under the current conditions, would be a critical mistake,” he said, adding that doing so would set off an arms race in the Middle East.

Iran denies it’s seeking to build atomic warheads but concerns it might develop the technology to do so propelled years of diplomacy that led to the deal with world powers.