(Bloomberg) — Investors desperate for clues on the outlook for U.S. shale oil production now have one of their first official forecasts for 2023, with the new chief executive officers of Permian Resources Corp. planning a 10% increase to take advantage of elevated crude prices. 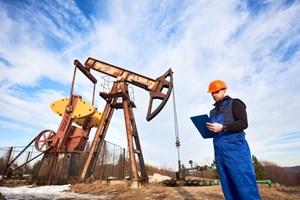 The 35- and 34-year-old “shalennials” Will Hickey and James Walter today took over the helm of Permian Resources, the result of a $7 billion merger between private equity-backed Colgate Energy, which they ran for seven years, and publicly-traded Centennial Resource Development Inc. Together they will own 6% of Permian Resources, which is expected to have a market value of about $4.5 billion when it begins trading. Other employees will own a further 7% of the stock.
They represent just one company among the hundreds that operate in the Texas shale fields, but their plan to boost output provides valuable insight about what next year may look like amid increasing pressure from inflation-fighting politicians to bolster production even as investors worry about the potential for overspending. More than two years after the start of the pandemic, US oil output is growing again but still 8% below its peak in March 2020, despite prices averaging nearly $100 a barrel this year. Equipment shortages, cost inflation and financial pressures to return cash to shareholders have all contributed to US shale’s slower revival than in previous price spikes.

Hickey and Walter, however, believe they have a key competitive advantage by focusing exclusively on the Delaware Basin in Texas, the western and less developed part of the larger Permian Basin, America’s biggest oilfield. And their growth can be achieved without adding any extra rigs, which are in short supply.

“If the US is going to grow production, it’s going to be on the back of the Delaware Basin,” Walter said in an interview.

The Delaware, especially near the Texas-New Mexico border, is the country’s lowest-cost major production zone and has the highest number of top-quality well locations left to drill, according to S&P Global Commodity Insights. Initially, operations there were much costlier than in the Midland Basin, the eastern part of the Permian, because the area lacked infrastructure like pipelines and storage tanks, deterring some producers. But now, with infrastructure built and growth flagging in other areas, the Delaware’s status as a relative newcomer to shale is an advantage, according to Walter.

“Growth gets harder over time as the best inventory in North America gets depleted,” he said. “The Delaware has more room to run and more top-tier undeveloped inventory than any other basin.”

Most publicly-traded independent shale operators won’t reveal their 2023 production plans until early next year. If others adopt Permian Resources’s double-digit growth rates, the US may return to its pre-pandemic record of 13 million barrels a day quicker than expected, providing some relief to global supply shortages that have contributed to rampant inflation around the world.

With West Texas Intermediate at $90 a barrel, and breakeven costs for most of the industry no more than $50 a barrel, there’s a strong incentive to investment in boosting output. But on conference calls with investors held over the past month, executives insisted they would focus on profits over production. The sector is making so much money as is that it will wipe out a decade of losses worth $300 billion by the end of this year, according to Deloitte LLP.

Hickey and Walter say they can hit their target of about 158,000 barrels of oil equivalent per day on average next year and the 10% growth rate — measured by output in the fourth quarter of 2023 versus the same period in 2022 — while also returning at least half of their free cash flow to investors through variable dividends and share buybacks, on top of a regular dividend. Like other shale operators, it’s a fine balance between how much money they invest in new production to take advantage of high oil prices, and how much they return to shareholders.

But it’s not growth at all costs. “We will continue to reevaluate that every six months to look at what the environment is and what maximizes free cash flow over the near term,” Hickey said. “The answer may be very different as commodity prices and service costs change.”

Hickey and Walter started Colgate in 2015 while in their late 20s, just after the oil price crashed as OPEC flooded the market with crude in a bid to wrestle back control from the nascent US shale industry. With backing from Texas-based private equity firms Pearl Energy Investments and NGP Energy Capital, they named their new company after the road they grew up on suburban Dallas, and moved to Midland.

They quickly saw an opportunity for leasing acreage for shale oil development around the city of Pecos in West Texas. “The Delaware was really in its infancy back then,” Billy Quinn, managing director of Pearl, said in an interview. “The rock quality was there but there was still some risk.”

Hickey and Walter, both graduates from the University of Texas at Austin, assembled contiguous blocks of land that could be used for horizontal drilling and started up their first rig in 2017. When Covid hit in 2020, the company benefited from a strong balance sheet made up of low debt and hedges that helped offset the plunge in oil prices, allowing it to make four acquisitions at the end of 2020 and in 2021.

The merger with Centennial marks a return of more than eight times the roughly $270 million invested in Colgate in three tranches. Pearl will own approximately 20% of the new Permian Resources and plans to hold for the long term.

“I’m not sure anybody has delivered the type of returns they have over the last six or seven years, especially on the large volume of dollars invested,” Quinn said. “There’s still a long way to go with this company. They’re not done yet.”