Offshore Energies UK thanked the Chancellor of the Exchequer for a “candid and constructive” meeting with the nation’s gas and oil producers - but warned that his new energy profit levy risks undermining attempts to attract capital investment to the UK. 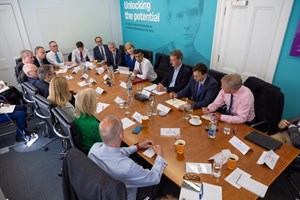 Chancellor Rishi Sunak spent the morning at the Net Zero Technology Centre in Aberdeen, hosting a roundtable with about 20 business leaders from the UK’s oil and gas industry.

He stressed the importance of the North Sea sector to the UK's domestic energy supply but confirmed that the tax on profits made by oil and gas companies operating on the UK continental shelf would rise from 40% to 65% - the highest rate of any UK sector.

The UK’s oil and gas operators collectively produce about a third of the nation’s gas and the equivalent of three-quarters of its oil. Those resources have been a key factor in protecting consumers from the shortages hitting Europe following Russia’s invasion of Ukraine.

Those supplies are however, predicted to dwindle rapidly in the next few years as older gas and oil fields become depleted – meaning continued investment in new resources is essential to UK energy security.

OEUK warned the Chancellor that his new Energy Profits Levy puts those investments at risk.
The new rate has deeply concerned the industry, not only because it is so high but also because of the speed with which it was imposed. This sudden change in tax policy, Sunak was told, risks undermining the UK’s hard-won reputation for fiscal stability - a key factor for companies considering new investments.

Deirdre Michie, OEUK’s chief executive, thanked Sunak for coming to Aberdeen but said the hard reality was that the new tax would undermine the industry.

She said: “The Energy Profits Levy is an unexpected new tax that changes the basis for investments. We had a candid and constructive meeting with the chancellor to discuss these issues and our industry leaders were clear about their concerns, especially the impact on investor confidence. Both sides have committed to further discussions.

“We will work constructively with the UK government and do our best to mitigate the damage this tax will cause but if energy companies reduce investment in UK waters, then they will produce less oil and gas. That means they will eventually be paying less taxes and have less money to invest in low carbon energy.”