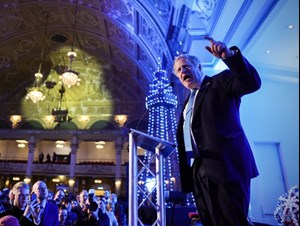 The prime minister’s comments underscore the contortions forced upon UK energy policy by the inflation crisis and Russia’s invasion of Ukraine. The government is breaking climate pledges made as host of the COP26 conference in December by mounting a £5 billion tax raid on the oil and gas industry that will subsidize fuel consumption and incentivize drilling.

“I don’t think we can turn our backs entirely on hydrocarbons,” Johnson said in an interview with Bloomberg TV on Friday. “The UK actually has a flourishing sector in the northeast of Scotland. It’s very important, we’ve got to keep that going.”

In his drive to lower the cost of energy by boosting supply, Johnson also stressed the importance of further investment in green technology and renewables.

“To tackle inflation in the medium-term, you’ve got to deal with supply-side issues,” he said. “So we need the energy companies to be putting some more into hydrocarbons, but we also need the whole country to be investing in more low-carbon energy.”

On Thursday, Chancellor of the Exchequer Rishi Sunak announced a 25% levy on the profits of UK oil and gas producers, saying he would use the funds to help consumers pay their soaring energy bills. In an attempt to not deter investment, Sunak said companies will be able to avoid some of this levy by making fresh investments in oil and gas extraction -- offsetting as much as 80% of new spending. That breaks a COP26 pledge not to subsidize fossil fuels production.

While most oil and gas companies acknowledged that Sunak was responding to an urgent real cost-of-living crisis, the industry reacted with a mixture of caution and disappointment. BP Plc said it would have to look again at its investment plans in the UK because the chancellor’s new levy is a “multiyear proposal” rather than a “one-off tax.”

Johnson said the UK will have a “regime that’s going to continue to encourage companies to invest” and said he’d spoken to the chief executive officers of BP, Shell Plc and others. “I’m confident the UK will continue to be incredibly attractive for investment, not least in green technology and both BP and Shell are keen to do that,” he said.