UK startup raises $150 million in largest round for carbon capture

(Bloomberg) — A London-based startup that makes small, modular units to capture carbon emissions from smokestacks has raised $150 million from investors that include the venture arms of Chevron Corp., Saudi Arabian Oil Co., and Samsung Group. 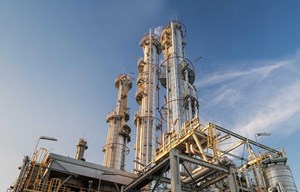 Carbon Clean Solutions Ltd. has tested its technology at more than 40 sites around the world, and says it can capture as much as 97% of carbon dioxide released by steel and cement factories and power plants.

The company has been developing the technology for more than a decade and is now ready to scale up, according to Chief Executive Officer Aniruddha Sharma. For climate startups, “the hardest thing is actually getting the tech out there and commercialized,” Sharma said.

Carbon capture technology is more than a century old. It was commercialized by gas companies to separate CO₂ that sometimes was found mixed with natural gas. In the 1970s, rather than releasing the CO₂, companies found a use for the greenhouse gas: it could be injected into an aging field to increase oil production.

Sharma’s company is using the broader market for CO₂, such as for making fizzy drinks or as a cooling agent like dry ice, to get customers to pay for its technology. The largest commercial unit it has deployed is in India and it uses the captured CO₂ to make soda ash, which is then used in detergents.

Although carbon-capture plants worth billions of dollars have been built before, $150 million is the largest single raise for a point-source capture startup.  Jefferies Financial Group Inc. acted as the financial adviser for the funding round.

In the climate era, however, CCS technology’s majority use is going to be simply burying the captured gas deep underground. Some 40 million metric tons of CO₂ is buried each year today, but most of it goes toward enhancing oil production. Climate models see the use of the technology growing to 10 times within the next decade to put the world on track to slow the rise in global temperatures.

CCS technology is separate from the set of technologies that aim to suck CO₂ directly out of the atmosphere. That process has to use a much more diluted stream of CO₂, which requires more energy to capture and thus typically costs a lot more.

Carbon Clean will test out storing away the greenhouse gas in partnership with Chevron in California, where it hopes to capture as much as 30,000 tons of CO₂ each year. The company says that it has captured 1.5 million tons of CO₂ over the past decade, though none of it has been stored away permanently yet.

The startup is betting that its modular approach means it can fit into existing factories more seamlessly than current custom-built capture plants. That should allow it to drastically lower the cost of captured CO₂ to as little as $30 per ton. For comparison, companies covered by the European Union’s emissions market pay about $100 per ton for their pollution.

The new funds will go toward hiring 100 new staff to add to Carbon Clean’s current tally of 60. The rest will go to buying more carbon capture units, which are currently manufactured using components from the U.S., Denmark and Germany.