The Energy Workforce & Technology Council honored Sen. James Inhofe (R-OK) with the "Champion of American Energy" award for his relentless and uncompromising commitment to the oilfield services industry and the domestic energy sector. Energy Workforce presented the award to Sen. Inhofe during its annual fly-in to Washington, DC, where Council Members are able to hear from and meet with policy makers and members of Congress. 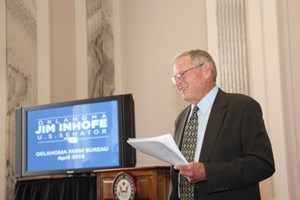 “Sen. Inhofe is a champion for the domestic energy industry, and a staunch supporter of the men and women in oilfield services,” said Leslie Beyer, CEO, Energy Workforce and Technology Council. “His work in the Senate to provide regulatory certainty led to American energy independence and lifted our domestic energy production to becoming gross energy exporters. It is an honor to recognize him for his many accomplishments supporting the industry and our workforce.”

Sen. Inhofe serves as ranking member on the Senate Armed Services committee and is also a senior member of the Environment and Public Works Committee and the Small Business Committee.

During his time in the Senate, Sen. Inhofe has championed policies that encourage the U.S. to meet its energy needs domestically and has worked tirelessly to cut unnecessary and burdensome regulations imposed on the oil and gas industry. In 1999, Inhofe introduced a bill to give states the freedom to make their own decisions about oil and natural gas regulatory structures, including those concerning hydraulic fracturing. The bill was incorporated in the Energy Policy Act of 2005 and provided the regulatory certainty necessary for the shale boom to establish the United States as the global leader in oil and gas production.

“I am incredibly honored to receive the Champion of American Energy award from the Energy Workforce and Technology Council,” Sen. James Inhofe said. “For years, the war on fossil fuels has raged on. We saw great progress toward energy independence under the Trump Administration, but President Biden’s consistently anti-domestic energy agenda has hamstrung the American economy, all while giving the world's biggest polluters like China a free pass. Despite having an Administration that is actively undermining our domestic energy development, I have fought back against their indefensible policies like rejoining America into the radical, job-killing Paris Climate Agreement and their proposed new, unprecedented taxes on the oil and gas sector. I am also fighting for the approval of the Keystone XL pipeline and reducing the red tape preventing production here at home. I am proud to have organizations like the Energy Workforce and Technology Council by my side as we work towards unleashing America’s energy independence. Let’s keep up the fight," Inhofe said.