(Bloomberg) — Quantum Energy Partners, one of the largest private-equity players in U.S. shale, is reloading its leadership ranks following the step back of a senior partner earlier this year. 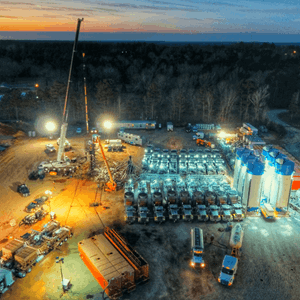 Charles Baillie, a nearly 30-year veteran at Goldman Sachs Group Inc., and Quantum Managing Partner Ajay Khurana have been named co-presidents of the Houston-based firm, Chief Executive Officer Wil VanLoh said. Amid a wave of key executives bolting from rival private-equity firms, Quantum is hiring its first-ever chief talent officer in a rare sign of expansion in the sector.

The moves come three months after Quantum announced that its president since 2017, Dheeraj Verma, was switching to the role of senior adviser following more than a decade at the firm. Quantum is ushering in new leadership as it aims to expand amid what VanLoh described as a golden era for oil investing.

“If you’re going to build a skyscraper, you better make sure that foundation is really strong and deep into the ground,” VanLoh said in an interview. “This is a lot about making sure our foundation is fortified before we continue to grow larger.”

After selling DoublePoint Energy LLC to Pioneer Natural Resources Co. for $6.4 billion last year, Quantum is seeking another three or four more exits from portfolio companies this year, each in the multibillion-dollar range. In the past month alone, a pair of Quantum-backed natural gas producers, HG Energy LLC and Rockcliff Energy LLC were said to be considering takeover interest.

Khurana’s promotion is immediate, while Baillie will retire from Goldman Sachs at the end of the month and join Quantum in September.

Baillie, who became a partner at Goldman during the financial crash of 2008, was most recently head of the bank’s strategy and corporate development for consumer and investment management. There he oversaw a chunk of the Goldman Sachs business that has $2.4 trillion in assets under management across several franchises.

Khurana, a former co-head of energy investment banking at Jefferies Financial Group Inc., was hired in 2018 to lead Quantum’s newly formed credit and structured-capital business, QL Capital Partners. His ascension to co-president serves as an acknowledgment of Khurana’s success in building QL Capital while working to keep “silos” from developing within the diversified firm, VanLoh said.

Besides the Baillie and Khurana moves, the firm has also hired Tommy Ho as its chief talent officer after he spent more than a decade at the executive search firm Heidrick & Struggles.

Quantum has managed more than $18 billion since its 1998 inception. The firm, with stakes in companies including software firm Datagration Solutions Inc. and shale driller Vantage Energy, raised $5.6 billion for its seventh fund in 2018, according to data compiled by Bloomberg. The firm is raising its eighth private-equity fund now.