(Bloomberg) – As October drew to a close, the White House saw another potential energy flash point on the horizon. 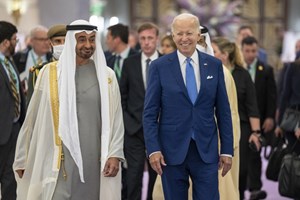 Diesel and heating oil inventories in the US Northeast were getting worryingly low. Officials swung into action, organizing a series of calls between Energy Secretary Jennifer Granholm and several of the country’s biggest oil refiners to discuss strategies to boost stockpiles. The tone was cordial, according to people with knowledge of the conversations.

But the very next working day, the oil industry was blindsided. At a hastily arranged press conference on Oct. 31, President Joe Biden castigated oil companies for handing “outrageous” profits to shareholders and executives rather than bringing down prices at the pump. Unless that changed, he warned, oil companies faced more taxes. “Their profits are a windfall of war -- the windfall from the brutal conflict that’s ravaging Ukraine and hurting tens of millions of people around the globe,” he said.

It was just the kind of whiplash that has repeatedly sown mistrust and stoked tensions with the fossil fuel industry over the course of the Biden administration, according to multiple interviews with executives and lobbyists involved in oil and gas, who declined to be identified because the meetings and conversations they described were private.

Biden’s team has been at odds with the industry since the 2020 election campaign. But as global energy prices spiked this year following Russia’s invasion of Ukraine, the White House called on oil companies to help, only to grow increasingly frustrated that it’s holding back on production while reaping record earnings.

“Month after month, these companies have posted record profits that they’ve then used to pad shareholder pockets rather than boost production and lower gas prices,” said White House spokesman Abdullah Hasan. “Month after month, we’ve offered them every opportunity and incentive to change their behavior.”

While they were never under any illusions about the president’s green ambitions, oil industry insiders say they’ve become increasingly unhappy with a series of conflicting policy priorities -- for example, moving within a matter of months from a halt on federal leasing for oil drilling to demanding more production -- and unrealistic requests such as spending billions of dollars to rapidly add more refining capacity.

Unwilling to act as fall guys for surging household fuel bills in the run-up to the midterm elections, typically low-profile industry figures are becoming more outspoken. Last week, the chief executive officers of Exxon Mobil Corp. and Chevron Corp. issued grave warnings about potential windfall taxes. Marshall McCrea, co-CEO of pipeline operator Energy Transfer LP, said this week that US energy policy is so all over the map that it’s becoming like “a Saturday Night Live skit.”

“It’d be funny if it wasn’t so tragically sad,” he added.

For its part the administration says it has approved 9,000 drilling permits, released 180 million barrels of oil from the Strategic Petroleum Reserve and essentially provided a floor under the oil price with a commitment to repurchase crude at $70 a barrel.

“If they don’t like the carrots approach, the president has made clear we can use sticks too,” Hasan said. “We will do what we need to do to support American families.”

The tensions come at a fraught moment for both the country and the rest of the world. President Vladimir Putin’s weaponization of Russia’s natural gas has left Europe facing a perilous winter. OPEC has been unwilling to ease a tight oil market; instead, last month, it defied US wishes by agreeing with Russia to reduce output.

Recent history shows the US can play a vital role in ramping up oil production to ease prices and provide energy security. After all, the shale revolution added more crude to global markets than the entire production of Iraq and Iran combined from 2012 to 2020, making the US the biggest producer of both oil and gas.

But to repeat that growth spurt again would require the right investor and policy support, as well as balancing increasingly ambitious US climate goals. So far the signs of that happening aren’t good.

“A lot of senior executives are kind of throwing in the towel with this White House,” said Stephen Brown, an energy consultant who formerly served as head of federal affairs for refiner Andeavor. “When we talk to folks inside the administration we hear things that are conciliatory toward establishing a relationship. And then you turn around and get hit between the eyes with a tweet.”

On Jan 20, 2020, his first day in office, Biden revoked a presidential permit for the Keystone XL pipeline, which would have allowed more Canadian crude to flow to Gulf Coast refineries. Days later, he issued a moratorium on new federal oil and gas leasing (later overturned in court).

Executives in the shale patch were infuriated as some of the best well locations in the Permian Basin are on federal land in New Mexico. The message was clear: Biden and his progressive caucus would be no friend to the oil industry.

As gasoline crossed the $3-a-gallon threshold in the middle of 2021, senior figures in the administration began paying more attention not only to the prices at the pump but also their role in pushing up inflation.

A critical moment came in November last year, when Biden accused the industry of “anti-consumer” behavior and complained that gasoline prices remained high even though oil and gas companies’ costs are declining.” Biden asked the Federal Trade Commission to investigate potential “illegal conduct.”

“The trust between industry and the administration has likely been deteriorating ever since,” said Frank Macchiarola, senior vice president of policy at the American Petroleum Institute, a group representing the energy industry. There’s a “lack of understanding of fundamentals of energy markets.”

By the time Russia invaded Ukraine in February, causing oil to spike to its highest since 2008, the White House had completed an about-turn from the earliest days of the presidency and was demanding the production of more oil and gas, rather than policies to curtail output.

“We are on a war footing,” Granholm told executives assembled for the CERAWeek by S&P Global oil conference in Houston in March.

But US producers, still battle-scarred from the height of the pandemic, when energy prices collapsed, were in no mood to cooperate. After a decade of poor returns for investors, a consensus had emerged on how to restore confidence stock prices: hold production flat and return as much cash as possible to shareholders.

As inflation surged in the first half of 2022, it became clear that the White House had an economic crisis on its hands. No US president has been re-elected with gasoline prices above $4 a gallon. In June, the nationwide average touched $5. As analysts began pricing in record profits for Big Oil, Biden went on the attack.

“We’re going to make sure everyone knows Exxon’s profits,” he said at a press conference in Los Angeles. “Exxon: Start investing and start paying your taxes, thanks.”

Exxon responded by saying it was investing heavily in the US and was working on a major Gulf Coast refinery expansion. But the narrative was now clear: Biden would be blaming Big Oil for high gasoline prices.

Less than two weeks later, Biden summoned top oil executives to the Department of Energy in Washington to discuss the issue. For more than an hour, the CEOs talked with Granholm about the barriers to higher fuel production and the policy moves that could help pare costs.

Granholm assured them that the administration wanted to collaborate. At one point, Wirth, the Chevron CEO, walked through the economics, logistics and constraints of US refining. Participants described the meeting as cordial and productive, a kind of olive branch offered to the industry after Biden’s tongue-lashing.

But it was a much different scene three months later when oil company officials met again with Granholm, National Economic Council Director Brian Deese, and Amos Hochstein, a senior energy adviser at the State Department.

The Sept. 30, session -- initially expected to take an hour and billed as a discussion of fuel supplies in the wake of Hurricanes Fiona and Ian -- quickly devolved. There was little talk of the storms. One participant described it as “a lecture” from Granholm.

Administration officials berated the group for selling fuel overseas instead of storing more in US tanks, and suggested that without voluntary industry action, the government could force companies to stockpile more domestically. At least one official blasted the companies for reaping high profits while failing to address low inventories.

As Granholm and Hochstein pressed the companies to curtail fuel exports and explain how they would work to lower prices, the industry participants repeatedly raised objections, insisting they couldn’t divulge those details in front of competitors. That kind of frank discussion could be a violation of US antitrust law, they argued.

The meeting broke up less than half an hour after it began.

Tensions between the US fossil fuel industry and a Democratic president were probably always to be expected, but the current clashes between both sides have been far more visible than when Barack Obama was president.

“I don’t think they were warm and embracing, but they weren’t bristly toward the industry,” Dan Eberhart, a Republican donor and CEO of an oilfield services company, said of the Obama administration.

With nationwide average gasoline prices on the rise again -- reaching $3.79 a gallon on Nov. 3 -- and midterm elections now just days away, Biden appears to be in no mood to back down.

“I’m working like hell to deal with the energy prices,” Biden said Friday. I’m going to have a little -- as they say -- come-to-the-Lord talk with the oil companies pretty soon.”