(Bloomberg) – The Czech Republic imposed its first windfall tax on some of the biggest businesses to help finance energy subsidies without boosting government borrowing. 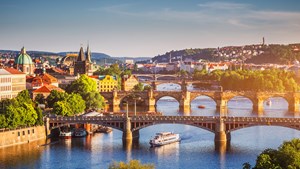 Lawmakers on Friday approved Finance Minister Zbynek Stanjura’s proposal to slap a 60% “tax surcharge” on the main energy companies and banks. The levy will be in place for the next three years and target extraordinary profits caused by surging energy prices and high interest rates.

“I take no joy from the fact I’m introducing this tax,” Stanjura told the lower chamber of Czech parliament before the vote. “If circumstances allow, I will be the first to propose abolishing it.”

The bill is a key part of the center-right government’s strategy to ease the impact of the worst cost-of-living crisis in three decades while still trying to wean the country off record pandemic-era budget deficits. After months of deliberations, the five-party ruling coalition agreed to subsidize electricity and natural gas bills, responding to signs of growing frustration among the public and calls for aid from companies.

The windfall tax should bring about 85 billion koruna ($3.5 billion) in extra budget revenue next year, according to Finance Ministry calculations. It said the European Union’s energy price caps will result in additional income of some 15 billion koruna in 2023.

The plan has caused friction between the government and businesses affected by the new levy, who argued that it may damage the Czech Republic’s reputation among foreign investors. Unipetrol, the Czech unit of Poland’s biggest refiner PKN Orlen, said the new tax will curb funds needed for upgrades.

Billionaire Daniel Kretinsky’s energy conglomerate Energeticky a Prumyslovy Holding said on Friday that it will move its Prague-based EP Commodities trading business to another country to avoid paying the new tax.

The unit generates most of its profit outside the Czech Republic and subjecting it to the local windfall tax is “completely nonsensical,” EPH said in a statement.

The year-old administration has softened its push to curb fiscal deficits because of the economic impact of Russia’s invasion of Ukraine. Still, it plans to cut the budget shortfall to 295 billion koruna next year from the 375 billion-koruna gap planned for this year.

While the Czech debt load, projected at 42% of gross domestic product this year, remains one of the lowest in the EU, the central bank and a fiscal watchdog have criticized the pace of deficit reductions and urged faster consolidation.