(Bloomberg) — Norway will add a new natural gas field in the Norwegian Sea from 2026 in a push to bolster supplies to continental Europe as the EU rushes to replace Russian flows. 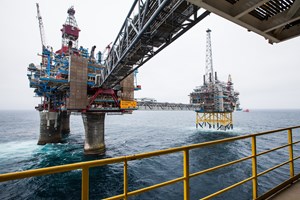 Equinor ASA will lead the development of the Irpa gas discovery in the northern reaches of the Norwegian Sea to unlock an estimated 20 billion standard cubic meters of recoverable reserves, Norway’s Petroleum and Energy Ministry said in a statement on Tuesday. Investments will total 14.8 billion kroner ($1.4 billion), with production planned for the fourth quarter of 2026.

Petroleum and Energy Minister Terje Aasland received the development plan as Europe faces years of uncertainty over gas supplies after flows from Russia were cut in the aftermath of the invasion of Ukraine. Norway has sought to boost production in an attempt to offset some of that decline.

“Europe’s need for energy security is enormous and its hugely important these days that we can continue to develop the Norwegian continental shelf and continue to be a stable and long-term supplier of gas to the European market,” Aasland said in an interview.

Irpa, previously known as Asterix, will be developed with a seabed facility that will be connected to the Aasta Hansteen platform for processing and further transport through the Polarled gas pipeline to the markets in Europe. It is expected to produce until 2039, extending the life of Hansteen by seven years.

“This lengthens the lifespan of Aasta Hansteen, secures gas deliveries to Europe and creates jobs and ripple effects,” Equinor Executive Vice President for Projects, Drilling and Procurement, Geir Tungesvik said Tuesday. At 1,350 meters (4,429.1 feet) the field is the deepest on the Norwegian continental shelf, he said, adding that accessing the gas will involve the use of new technology to insulate the pipelines from extreme cold.