(Bloomberg) — West Texas was hit by its largest earthquake on record on Wednesday, rattling parts of the Permian Basin in the latest temblor for the oil-producing region. 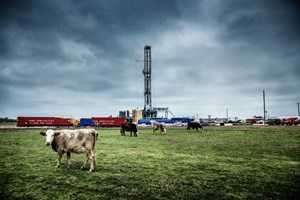 The 5.3-magnitude earthquake hit at 3:34 p.m. local time near Mentone, Texas, according to the US Geological Survey. The event topped a magnitude 5 quake that struck just north on March 26, 2020 and was considered the region’s largest.

The earthquake caused shaking that was noticed by those in the oil-and-gas industry. Several drillers in the Permian Basin, including ConocoPhillips, felt the earthquake’s impact, Truist Securities analysts wrote in a note to clients. West Texas public radio reporter Travis Bubenik even tweeted that his computer monitor started swaying.

5.3 magnitude earthquake reported this hour in West Texas - centered up near the Texas-New Mexico border.

Since 2018, about 1,000 earthquakes of magnitude 2.5 and larger have struck within 31 miles (50 kilometers) of Wednesday’s event, the USGS said. Over the past two decades the central and eastern US region has experienced a rise in the number of earthquakes, the agency said.

Typically, a magnitude 2.5 to 3 quake is the smallest felt by people, while a magnitude 4 can cause moderate damage.

Texas state lawmaker Eddie Morales, who represents part of the West Texas region at the state capitol in Austin, said Wednesday that he spoke with authorities and there were no reported injuries or damage at that time.