(WO) — The UK’s offshore industry will be hit hard by the chancellor’s latest tax changes, which threaten to drive out investors, drive up imports and leave consumers increasingly exposed to global shortages, Offshore Energies UK warned. 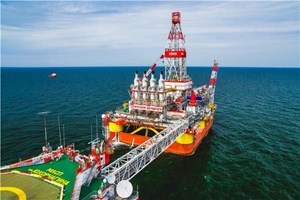 It was reacting to today’s budget in which Jeremy Hunt, Chancellor of the Exchequer, raised overall taxes on UK oil and gas production to 75%. The Treasury has also introduced a new 45% levy on electricity generators, including offshore wind, starting from January 2023.

OEUK said the tax changes would impact not just North Sea operators but the hundreds of other companies in their supply chains, operating in towns and cities across the UK. Many provide specialized services such as marine engineering, deep sea diving or subsea communications, and will face cutbacks or being driven abroad, if investment declines. Altogether, the industry supports nearly 200,000 UK jobs.

The offshore sector has long been the UK’s most highly taxed UK industry. It was paying 40% tax on oil and gas production even before the windfall tax was imposed in May. Since then, it has been paying 65%.  The latest rise takes the overall tax rate to 75% from January.

It means that the total taken out of the UK industry between now and 2028 will amount to £80 billion, say Treasury documents, including £15 billion this fiscal year and £20 billion the year after.

Mr. Hunt also extended the duration of the windfall tax (technically known as the Energy Profits Levy) so that it will now end in March 2028 rather than December 2025. Crucially, he warned that it would remain in place even if oil and gas prices fall, as is widely expected. It means the UK offshore sector faces some of the world’s highest taxes.

Deirdre Michie, OEUK’s chief executive, said that consumers were suffering, and it was right for all sectors to play their part but added: “These tax changes will undermine one of the of the UK’s most important industries. The UK offshore industry generates jobs for 200,000 people plus billions of pounds in taxes. The oil and gas it produces buffers the nation against global shortages. These changes put all those benefits at risk.”

The UK gets three-quarters of its total energy from oil and gas: 24 million UK homes rely on gas boilers for heating; 1.5 million homes rely on heating oil; 42% of the nation’s electricity comes from gas-fired power stations; and 32 million UK vehicles are powered by petrol or diesel.

Such reliance on oil and gas means security of supply is essential. OEUK has long argued that the best way to protect the UK from global shortages is to produce as much of its needs as possible from its own waters. The UK cannot produce all its own oil and gas but what it does produce acts a vital buffer against global shortages.

The North Sea, Irish Sea and Atlantic waters north of Scotland, still contain enough oil and gas to power the nation for the decades needed to reach net zero – but those resources need a constant flow of investment to extract them.

The industry is participating in plans to invest £200 billion by 2030 across all energies, including the lower-carbon ones needed to drive the energy transition. But today’s budget, warned OEUK, means much of that investment could dry up. If it does then oil and gas production will plummet so fast that, by 2030, the UK could be forced to import up to 80% of its gas - double the current level.

Such tax changes and political turbulence also risk undermining the UK government’s plans to make the UK carbon neutral by 2050. OEUK has warned that the nation will see many changes of politicians and governments over that time – so ‘net zero’ will only happen if there is long-term agreement and consensus. Short term political battles and policy swings, like those of the last few months, will make that energy transition impossible.

The trade body, however, welcomed news that the government would undertake a long-term review of the long-term tax treatment of UK oil and gas production – something the sector has been seeking for months.

“These are tough times for consumers. They are being hit by surging global energy prices caused by Putin’s invasion of Ukraine, and by the economic fallout from political failures in the UK.

“When people face such widespread hardship its right for all sectors to play their part. Our members are doing that. The UK’s offshore industry has contributed £400 billion in taxes over the last five decades and was already due to pay about £15 billion more this year.

“However, there is a balance to be struck. We remain proud to pay our taxes, but this latest increase means UK offshore operators will be paying a total rate of 75%. This rate is so high that it threatens to drive investment out of the UK altogether. The extension to 2028 takes no account of the likelihood of prices falling in that time.  It’s also worrying that we are increasing taxes on low-carbon electricity generation like offshore wind.

“But it’s not just the rate that is so damaging. It’s also the disruption and uncertainty generated by constant changes to our tax system.

"No industry can invest or plan without knowing what kinds of tax regime will be in place. We want to work with the government to build a long-term tax regime that will let us play a full role in the energy transition.

“Unlike politicians, energy companies think and invest in terms of decades - not election cycles. That approach means we have built a stable, strong and prosperous industry which has supported the nation for 50 years. We’re now planning for the next 50 years, and we want to work with our politicians to do the same.”