(Bloomberg) – Moscow may have found an important new outlet in the United Arab Emirates for some of its crude shunned by traditional buyers in Europe following Russia’s invasion of Ukraine. 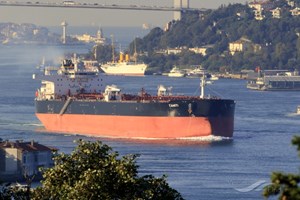 An earlier photo of the oil tanker Tahiti, which delivered crude to the UAE. (Source: VesselFinder.com)

The Suezmax tanker Tahiti discharged a cargo of about 700,000 barrels of Russian crude at Abu Dhabi National Oil Co.’s (ADNOC) Ruwais refinery earlier this month after hauling it from the Arctic export terminal at Murmansk, ship tracking data monitored by Bloomberg show.

Russia needs to find new markets for the crude it mainly sold to customers in Europe before European Union sanctions cut off almost all of that flow on Dec. 5. Many buyers in Europe have already stopped buying Russian crude.

The Tahiti’s crude was offloaded some time between Nov. 2 and Nov. 4, after which the vessel anchored off the terminal for another week. During that period it continued to display a draft suggesting it still had its cargo on board, but a ship’s depth in the water is entered manually into its satellite tracking system.

The vessel left anchorage on Friday and the draft was updated to a figure that suggests the tanker was empty at that time. No other oil carriers approached the Tahiti during its time at anchor, so it is unlikely that its cargo was discharged onto another vessel.