(WO) — Oil and gas companies risk being "driven out" of investing in UK waters if Jeremy Hunt, the Chancellor, carries out threats, trailed in the media, to raise the windfall tax to 35%, Offshore Energies UK (OEUK) has warned. 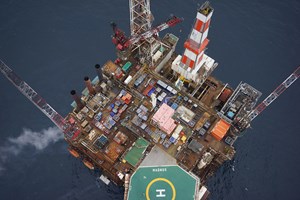 The Magnus platform in the UK North Sea.

OEUK, the leading representative body for the UK offshore energy industry, said its members were shocked by this weekend's reports of the proposed windfall 'supertax'.

The UK's oil and gas producers were already paying an effective tax rate of 40% - the highest rate of any industrial sector - on the profits from oil and gas production, before the additional 25% windfall tax was imposed earlier this year. It means they are already now paying a 65% tax rate.

If the UK government added another 10% to the windfall tax it would push the overall tax level to 75% - a rate so high that many oil and gas producers would have to reconsider investment plans worth billions. OEUK has told Mr Hunt that its members are proud to pay their taxes but long-term fiscal stability and intelligent taxation were essential to the future of an industry that plans and invests over years and decades.

It has also warned that a reduction in investment would soon translate directly into reduced UK production of gas and oil - damaging jobs, undermining the UK's energy security and driving up imports.

Long-term, it would also risk undermining tax income, because the Chancellor can only tax the profits on oil and gas produced in UK waters. He cannot tax profits earned on overseas production - even for companies based in the UK.  This means that if UK production of oil and gas declines then the tax 'take' will fall too.

An OEUK spokesperson reminded Mr Hunt that the UK got 75% of its total energy from oil and gas - and so should be doing all it could to protect its North Sea energy industry. “We’re completely taken aback by this, coming just days before the Chancellor gives his fiscal statement. Our industry plays a critical role in providing reliable and responsible supplies of energy to the UK, with all the benefits that brings in generating taxes, secure energy and jobs for UK workers.

“Imposing sudden extra taxes will make it even harder for these companies to invest in UK energy production - both the gas and oil we need today, and the wind, hydrogen and other low-carbon energies we need to reach net zero by 2050.

"Driving investment out of UK waters into other countries will increase reliance on imported energy,  reduce the tax flow to the Exchequer, and make it even harder to increase our domestic production of lower-carbon energies.

“We need a diverse range of offshore operator and supply chain companies with the skills and people to build the low-carbon energy future we all want to see. It deeply concerns us that that the complexity of the UK offshore energy sector is not being considered when we are on the cusp of such an important transition."