(Bloomberg) – A methane cloud spotted over Alabama last month appears to have been caused by a natural-gas release following a fire at a Kinder Morgan Inc. compressor station, the pipeline giant said. 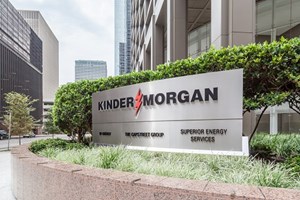 The flash fire was confined to a small area of its Gallion Compressor Station, according to Kinder Morgan spokesman Katherine Hill. Workers “followed standard safety protocols by performing an emergency shutdown of the compressor station, resulting in a controlled release of natural gas from the facility to help extinguish the fire.”

Methane is the primary component of natural gas and has more than 80 times the warming power of carbon dioxide during its first two decades in the atmosphere.

The Gallion fire occurred Oct. 20 during the commissioning of an automation upgrade project, Kinder Morgan said. The cause is under investigation. Gallion is on the Southern Natural Gas pipeline system.

The European Space Agency’s Sentinel-5P satellite spotted the plume and the data was analyzed by Kayrros SAS. Satellite observations, aerial surveys and other measurement campaigns have shown that malfunctions and emergencies — like the fire at Kinder Morgan’s compressor station — can significantly increase the climate impact of operations.