HOUSTON – The Texas oil and gas exploration and production economy enjoyed a year of recovery in 2021 on the heels of nearly two years of contraction, according to the Texas Alliance of Energy Producers’ Texas Petro Index (TPI). 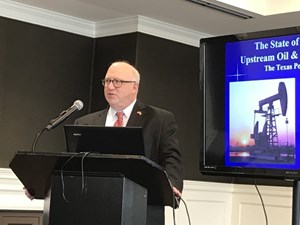 “The Texas upstream oil and gas industry endured a punishing two-year contraction, the second year of which was at the hands of COVID, which finally came to an end with the January 2021 trough in the Texas Petro Index,” said Alliance Petroleum Economist Karr Ingham, who created the TPI and maintains it monthly.  “The index has been steadily on the rise since then with higher prices, a growing rig count, and a return to at least modest growth in industry employment.”

“Assuming continued steady growth in upstream activity levels in Texas in the coming year, the TPI is on track to reach and surpass its previous peak in late 2022,” Ingham said.

The Texas Petro Index achieved its all-time high of 314.0 in November 2014 but is unlikely to reach that level again due to the extraordinary increases in efficiency and productivity.

“Simply put, fewer rigs, employees, and other resources are required to produce record and growing volumes of crude oil and natural gas,” Ingham said. “Even as production continues to grow, other upstream indicators remain well below prior levels, keeping the index in check.”

Serving as an indicator of the state of the upstream oil and gas economy in Texas and an industry business cycle analysis, the Texas Petro Index is based at 100.0 in January 1995.

All components of the Texas Petro Index were trending upward during 2021, driven primarily by crude oil price recovery following the sharp declines of 2020.

“Record or near-record production for crude oil and natural gas in Texas, while other upstream indicators are nowhere near record levels, tells a fantastic story about what Texas oil and gas producers from large to small have been able to achieve,” said Ingham. “While we may wish for higher rig counts, industry employment, and payrolls, the purpose of any economy is to meet the wants and needs of its consumers.”

The US oil and natural gas industry, led by Texas, continues to do an extraordinary job of providing abundant and affordable energy to power the economy and the daily lives and work of US households and businesses, he said.