(Bloomberg) — U.S. LNG developers seeking to burnish their green credentials and boost their competitiveness on a crowded global stage are touting a costly and largely untested technology: carbon capture. 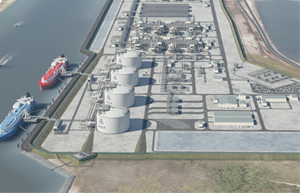 Over the past 24 hours, both Cheniere Energy and Sempra Energy, two of the largest American exporters of liquefied natural gas, announced they were looking to add carbon capture and sequestration capabilities to their projects. Last month, Houston-based NextDecade said it would launch a separate carbon capture business unit.

The moves come as the industry works to clean up its image and bring a dozen stalled projects into development by landing contracts with environmentally conscious buyers in Europe and elsewhere. While American LNG is among the cheapest in the world thanks to abundant shale gas, its carbon footprint is significant. The European Union, a key U.S. export market, has sought to pressure American firms to slash their emissions as the bloc tightens its own carbon goals.

“The greening up of the value chain here in North America is something the sell side and buy side should follow because I suspect that it will make America increasingly competitive over time,” Sempra Chief Executive Officer Jeff Martin said during an earnings call Wednesday.

“I think we’re committed and have committed some real dollars to development and engineering,” Fusco said. “I think our customers are going to expect us to continue to offer a sustainable LNG product.”

Still, the moves remain largely hypothetical, with neither company offering up a timeline or a budget for investing in the green projects they floated. While federal tax credits are available for carbon capture, the technology isn’t currently economic and hasn’t been deployed at a commercial scale.