Over the past few decades, much effort has been made by E&P companies and service providers to improve the economics and efficiency through continuous optimization of well drilling and completion parameters. Among them were the adoption of horizontal well drilling and multi-well pad location; completion techniques, such as zipper hydraulic fracturing operations; fracturing fluid systems; and improvements to logistics, such as the use of local sands.

Fracturing fluid and sand intensities, which are defined as bbl/ft and lb/ft of perforated interval, respectively, are the two most important parameters to maximize oil and gas production from shale reservoirs. To place large volumes of fluid and sand into the reservoir, many fracturing pumps with the support of auxiliary equipment are deployed and operated continuously. Powered by diesel, a conventional frac fleet typically consists of 18 to 24 pumping units and five to seven pieces of support equipment. This equipment is used to pump fracturing fluid and sand down the wellbore and into the targeted rock for an average of 16-20 hr/day. Each frac fleet may consume upwards of 7 million gal of diesel annually, while emitting 154 million pounds of CO2 into the atmosphere (Chapa).1

The oil and gas industry has a long history of deploying innovative technologies to improve operational efficiency and lower production costs. To further address the environmental impact associated with hydraulic fracturing operations, the industry has been focusing on developing equipment technology that can be powered by cleaner fuel sources, such as natural gas, which is readily available in most oil and gas basins. Equipment powered by natural gas reduces greenhouse gas (GHG) emissions and EPA-regulated pollutants.

Since 2018, BJ has been developing and validating next-generation fracturing equipment to support the industry’s efforts to reduce emissions, while improving operational efficiency and economics. BJ Energy began its pursuit of a new fracturing equipment solution by developing a methodology for technical evaluation against a set of pre-defined requirements related to emission profile, capital and maintenance cost, mobility, reliability and other environmental factors, such as noise and operational footprint. It was concluded that the natural gas-powered direct-drive turbine technology scored the highest among all technologies available in the marketplace.

Evaluation of next-generation fracturing technology. The main function of a frac fleet is to deliver the hydraulic horsepower required to perform fracturing operations. Since a frac fleet is largely comprised of frac pumps, the decision was to focus initial efforts on evaluation of the power train of the pumping platform. Although there were many factors for consideration, the five areas listed in Table 1 were thought to be the most relevant. Instead of comparing one technology versus another, it was believed that an in-depth analysis of the five areas against the same set of objectives would result in a more objective conclusion.

While it is expected that technical developments will continue to be made to advance next-generation fracturing equipment, the technologies evaluated herein were limited to those that had either been field-tested or achieved commercial status by the end of 2021.

Although natural gas reciprocating engines were determined to have the highest thermal efficiency among all prime movers evaluated, the direct-drive turbine had the highest power transfer efficiency (mechanical energy to hydraulic horsepower), system power density, and optimal mobility, due to its modular configuration. In a multi-basin emission study, the direct-drive turbine technology showed one of the lowest emission profiles, even under the most stringent environments (altitude and temperature) for gas turbines.

In addition, the direct-drive turbine was determined to have significantly lower capital cost in comparison to electric frac fleet options and did not require personnel with specialized skill sets for high-voltage power handling. Therefore, following evaluation of all solutions against the pre-defined requirements, the direct-drive turbine technology was selected for field validation (Fu).2

Natural gas-powered direct-drive turbine technology. The application of a direct-drive turbine in hydraulic fracturing is the result of decades of technical advancements made in both turbine machinery and speed reduction technology. This, coupled with an in-house engineering team with in-depth operational equipment design knowledge and technical support capabilities, further reinforced the company’s decision to move the technology into the next phase of development.

The frac pump shown in Fig. 1 has a 5,000-hp direct drive turbine power section and a 5,000-hp pump on a single trailer, giving rise to the highest power density in the industry. Compared to conventional and other equipment solutions, the direct-drive turbine fleet results in approximately 60% less pumps on location and a 40% reduction in total equipment footprint. Through a highly efficient and robust single-speed reduction gearbox, the system converts over 88% of the shaft horsepower generated at the turbine to hydraulic horsepower at the pump, the highest in the industry. The economic and environmental benefits of efficient power transfer are lower fuel consumption and greenhouse gas emissions. 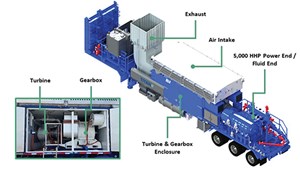 The direct-drive turbine technology enables utilization of a wide variety of fuel options including field gas, LNG, CNG and even diesel as a contingency fuel, which may be used in the event of a natural gas supply interruption. The fleet contains “matched power” technology, providing BJ with ultimate control in customizing the amount of HHP rigged in on location to maximize both the pumping capability and power to reduce waste, while optimizing efficiency and fuel economy. Its modular horsepower feature further allows scalable output and real-time adjustment for changing operating environments, such as high temperatures or altitude. The chosen turbine technology also allows for rapid shutdown and startup cycles between stages to reduce equipment idle time, resulting in additional fuel savings and emissions reduction.

Technical validation of direct-drive turbine technology—1,000-hr field trial. In early 2020, after months of yard tests, the company deployed a prototype unit in the Haynesville shale, one of the most challenging operating environments for any hydraulic fracturing equipment, due to its high reservoir pressure. For the trial, the prototype unit was inserted into a fleet of conventional diesel powered frac pumps, providing the required hydraulic horsepower. The 1,000-hr field trial was designed to achieve the following main technical objectives:

Despite the many technical challenges related to the power end and fluid end at the initial stages of the trial, the company successfully completed the 1,000-hr field trial by April 2020. Results of the field trial demonstrated that the direct-drive pump solution met all pre-defined objectives, including performance and reliability of the turbine, speed reduction gearbox, the use of various fuel sources (including all natural gas sources and diesel for contingency purposes), operating hours, and operation of the newly developed pump control platform. 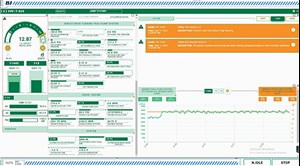 Core to the digital platform is the control system, which is built on modern architecture that is scalable to meet any future needs. It enables data to be processed both locally and in the Cloud. The browser-based user in-face allows for flexibility of the operating system and a multitude of physical interfaces, such as laptops, tablets and mobile devices. The open interoperable controls eliminate the need for operators to make uninformed decisions. Data collected from the fleet is used to predict and prevent equipment failures. Machine learning and data analytics help select optimum operating limits. Key functionalities of the digital control include, but are not limited to, the following:

Emission white paper. Greenhouse gas emission profile has been a key criterion in selecting next-generation hydraulic fracturing technology. Despite the intensifying focus on sustainability, there is still much confusion in the marketplace about which technologies provide the most greenhouse gas reduction while best enhancing economics and operational efficiencies. This confusion is amplified by early conclusions and bias without accounting for factors that are not considered within EPA definitions, using actual field data, or proper validation. To address this, the company published an emission-related whitepaper in December 2021 for the analysis of emission profiles and performances of main type of hydraulic fracturing equipment technologies (Nieuwenburg).3 Co-authored by an academic expert and based on science and actual data, the white paper was designed to provide clarity and transparency on all factors impacting emission profile. Those contributing factors are presented in Fig. 3.

For the analysis, original equipment manufacturer engine data were used to determine the required number of units, engine load, and fuel consumption for the outlined hydraulic fracturing technologies. The emissions results presented in this paper also include BJ’s TITAN natural gas direct-drive turbine technology, which is based on certified third-party test data, following U.S. EPA methods. The testing was conducted under actual operating conditions and reflects the many engine characteristics and operating parameters that are representative during a full operations cycle. The emission models described in the white paper were designed and independently validated to provide a complete picture of total emissions released in an operating day, including all associated activities, such as priming pumps, pressure testing, pumping operations and engine idling.

Across the Haynesville, Permian, Eagle Ford, and Duvernay/Montney basin scenarios, the service company’s natural gas direct-drive technology demonstrates the lowest GHG emissions. Most importantly, it emits virtually zero methane when under normal operating conditions and has lower EPA regulated carbon monoxide, nitrogen oxide and particulate matter emissions. The advantage stems from having one of the highest efficiencies in transferring thermal energy to hydraulic horsepower.

Deployment of first commercial TITAN fleet in the Haynesville. In March 2020, the company signed a long-term contract with Aethon Energy for the deployment of the first commercial TITAN fleet in the Haynesville shale. The deployment allowed the company to further validate the technical and operational performance at the fleet level, including the FACTS system. The first TITAN fleet has a total of 40,000 hp, derived from eight 5,000-hp MCP (maximum continuous power) direct-drive turbine units (up to 5,500 hp maximum intermittent power), providing a significant reduction in operating footprint on location.

The fleet was deployed to the Haynesville shale in early 2021 and has been in operation ever since. After more than one year of operation, the fleet has achieved several key milestones including regularly pumping over 20-21 hr/day, pump time in excess of 500 pumping hr in a month, pumping rate of 100 bbl/min at 11,900 psi with only eight pumping units, less than 48 hr of pad-to-pad moving time, surpassing 7,000 fleet pumping hours and displacing over 10.1 million gal of diesel by using on-site processed wellhead gas ,resulting in elimination of over 32 million pounds of GHG being emitted to the atmosphere.

Ongoing innovation. The company has invested significantly in engineering resources in maximizing TITAN’s power train performance with patented power end design and fit-for-purpose support equipment. The R&D investment will further enhance the company’s efforts to reduce environmental footprint on location and support the industry’s efforts to achieve step changes in operational efficiency with methods that include simultaneous fracturing (Simul-Frac) and continuous fracturing operations. In the coming months, the company expects to launch a proprietary electricity powered blender system that will further reduce carbon footprint and increase operational performance.

Dan Fu
BJ Energy Solutions
Dan Fu is V.P. of engineering and technology for BJ Energy Solutions. Prior to this role, he spent 20 years with Schlumberger in various product development and technical support positions around the globe. Dr. Fu has a PhD in chemistry from University of Southern California and an MBA from Colorado State University.

Tony Yeung
BJ Energy Solutions
Tony Yeung is manager of Equipment Engineering, leading the TITAN technology development for BJ Energy Solutions. Prior to joining BJ, he spent more than 15 years with various service companies, designing and developing new equipment used in well completions and well simulations. He is a P.Eng in APEGA and earned a BSc degree in mechanical engineering.