Upstream oil and gas activity in the southwestern U.S. expanded at a strong pace in the third quarter, according to oil and gas executives responding to the Dallas Fed Energy Survey. The business activity index—the survey’s broadest measure of conditions facing Eleventh District energy firms—remained elevated at 46.0 but below the record-breaking 57.7 reading of the second quarter, Fig. 1. This suggests the pace of the expansion decelerated slightly but remains solid. 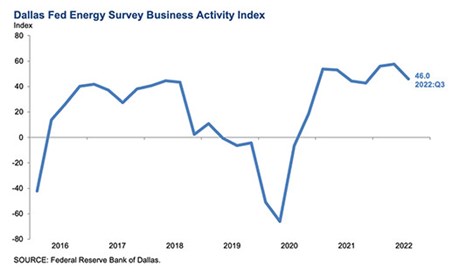 Methodology. Firms are asked whether business activity, employment, capital expenditures and other indicators increased, decreased or remained unchanged, compared with the prior quarter and with the same quarter a year ago. Survey responses are used to calculate an index for each indicator. Each index is calculated by subtracting the percentage of respondents reporting a decrease from the percentage reporting an increase.

Data were collected Sept. 14–22, and 163 energy firms responded. Of the respondents, 105 were exploration and production firms, and 58 were oilfield services firms.

Special questions asked of executives this quarter focused on prospects for significant oil market tightening; whether the era of inexpensive U.S. natural gas will end; expectations for financial investors returning to the oil and gas sector; the impact of the increased 45Q tax credit on profitability of proposed carbon capture, utilization and storage projects; and the net firm-level impact of the methane tax in the 2022 Inflation Reduction Act.

It is taking longer for firms to receive materials and equipment. The supplier delivery time index remained elevated at 28.4 in the third quarter, down slightly from a series high of 31.9 in the second quarter. Among oilfield service firms, the measure of lag time in delivery of services declined from 36.0 to 21.1 but remained well above average. 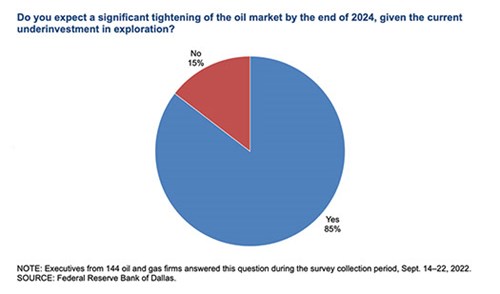 FIG. 4. Special Question on whether CCUS projects can be profitable. 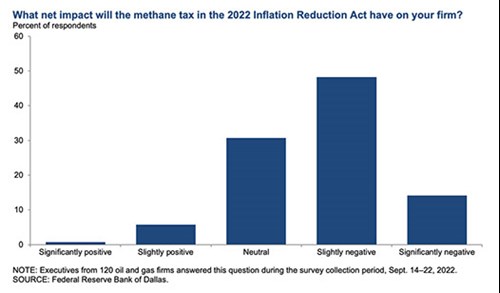 FIG. 5. Special Question on net impact of a methane tax. Oilfield services firms reported broad-based improvement, with key indicators remaining in solidly positive territory. The equipment utilization index remained elevated but fell from 66.7 in the second quarter to 55.2 in the third. The operating margin index remained positive but declined from 32.7 to 25.4. The index of prices received for services inched higher, from 62.7 to 64.9—a record high.

Michael Plante
Dallas Federal Reserve Bank
Michael Plante joined the Federal Reserve Bank of Dallas in July 2010. Recent research has focused on topics, such as the economic impact of the U.S. shale oil boom, structural changes in oil price differentials and macroeconomic uncertainty. He has also been the project manager of the Dallas Fed Energy Survey since its inception in 2016. Mr. Plante received his PhD in economics from Indiana University in August 2009.

Kunal Patel
Dallas Federal Reserve Bank
Kunal Patel is a senior business economist at the Federal Reserve Bank of Dallas. He analyzes and investigates developments and topics in the oil and gas sector. Mr. Patel is also heavily involved with production of the Dallas Fed Energy Survey. Before joining the Dallas Fed in 2017, he worked in a variety of energy-related positions at Luminant, McKinsey and Co., and Bank of America Merrill Lynch. Mr. Patel received a BBA degree from the Business Honors Program at the University of Texas at Austin and an MBA in finance from the University of Texas at Dallas.
Related Articles