Over the past year, liquefied natural gas (LNG) prices reached an all-time high. An analysis of the data identifies key insights into the implications for the LNG industry for 2022 and beyond.
Gillian Boccara Konrad Boszczyk Nicholas Browne Berend Heringa

For liquefied natural gas (LNG) markets, 2021 was another unprecedented year. After the volatility, uncertainty, and record-low spot LNG prices caused by the Covid-19 pandemic in 2020, the LNG market moved in the opposite direction during 2021 (see About the analysis). A combination of economic recovery, European concerns about the security of supply, and operational challenges at several major liquefaction facilities sent prices to all-time highs. 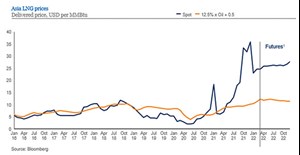 The average spot price for LNG in Asia in 2021 was $17.9 per metric million British thermal units (MMBtu), up 435% from the 2020 figure of $4.1 per MMBtu.1 These factors combined to make 2021 a year of unpredictable challenges, particularly for LNG buyers. The authors assess the implications of key LNG supply and demand trends in 2021, changes in LNG purchasing patterns, and European gas market fundamentals, including pipeline supplies and storage.

LNG prices entered 2021 on the back of a then-record spike in January, dropped in February and March, and steadily grew until the end of the year, as the LNG market tightened, Fig. 1. Spot prices in the final four months of the year averaged more than $30 per MMBtu. Compared with typical oil-linked contracts, spot prices were higher for almost the entire year.2 The average spot price for LNG in Asia in 2021 was $17.9 per MMBtu, up 435% from $4.1 per MMBtu in 2020.

Given that the sustained high prices from 2021 are carrying into 2022, we are likely to see a significant downward swing if fundamentals or perceptions of market tightness change. Either of these events could be driven by a reduction in demand because of a mild end of winter or spring. However, the European market has a limited storage buffer to cope with any supply disruptions, which could result in sustained high prices. 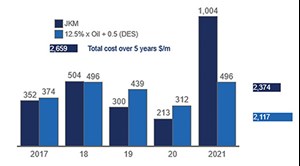 For LNG buyers, 2021 introduced stark realities. After 2019 and 2020, when spot LNG was priced at a significant discount, compared with legacy oil-indexed and Henry Hub–based contracts, 2021 saw a sharp reversal, Fig. 2. As an example, buyers with oil-indexed contracts would have paid nearly $425 million in 2021, compared with $328 million in 2020. However, one million metric tons per annum (MMtpa) in the spot market would have increased two-fold over legacy oil-indexed contract prices. Indeed, over the course of the past five years, the sustained spike in spot prices in 2021 was enough to tip overall costs in favor of Henry Hub followed by oil indexation.

As buyers recover from the challenges caused by the high spot prices of 2021 and prepare for sustained higher gas prices and supply security risks in 2022, they may begin to reconsider their LNG procurement strategies and close off or better manage spot exposures (see McKinsey 2022 LNG buyer survey). Strategies may include signing long-term contracts, purchasing additional short-term strips of cargoes indexed to oil prices, and expanding hedging. A key litmus test will likely be whether European buyers return to long-term contracting, given they were most affected by high prices as a region because of higher incentives for decarbonization. This also likely explains why European buyers have signed far fewer long-term contracts than Asian buyers in recent years.

Demand uncertainty. Higher LNG prices may reduce the pace of demand growth in price-sensitive markets. This also could start to happen in markets in which demand was previously resilient, such as Europe. A second year of high spot prices may be enough to cause permanent demand decline in industries where electrification is available and to lead to a sustained gas-to-oil and -coal switch in power. 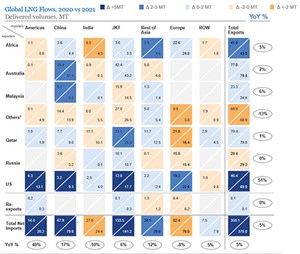 By contrast, demand from Asian markets that have a heavier reliance on oil-indexed contracts should prove resilient. In China, with the Power of Siberia pipeline from Russia slowly ramping up delivery, LNG demand should continue to grow at double digits, building on the 18% growth seen in 2021. In Europe, a return to “normal” wind levels combined with mild temperatures could soften demand pressures. Higher hydro levels in Brazil could also take a few MMtpa of demand off the market. A final factor to watch out for is Japanese nuclear. Japan now has nine operational nuclear reactors, seven of which were restarted in 2021, and their performance will likely be a key factor in determining Japanese power utility demand.

Strong investment signals and new and returning LNG capacity. In total, 17.2 MMtpa of new LNG capacity will enter the market in 2022 from the Calcasieu Pass LNG facility (10.0 MMtpa), the Coral South floating liquefied natural gas (FLNG) facility, and LNG Train 3 at Tangguh (3.8 MMtpa). In addition, Train 6 at Sabine Pass (4.6 MMtpa), which became operational at the end of 2021, will reach full capacity. Meanwhile, the Snøhvit LNG project (4 MMtpa) should return at some point in the first half of 2022. However, even this level of new and returning capacity is unlikely to be enough to soften the market. 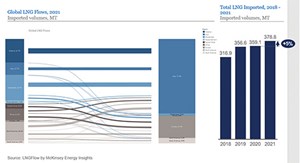 For projects seeking final investment decisions (FIDs), price and investment signals are strong. Project developers that achieved marketing success in 2021, such as Cheniere Energy and Venture Global LNG, appear well-positioned to move ahead, as do those prepared and able to sanction FIDs without marketing full volumes, such as QatarEnergy. For other projects seeking FIDs, 2022 will be a pivotal year that determines whether investor concerns about the environmental impact of investing in energy are outweighed by improved returns and growing emphasis on LNG’s role in ensuring the security of the energy supply.

GLOBAL LNG SUPPLY AND DEMAND IN 2021

Supply. Global LNG exports in 2021 increased by approximately 23.0 MT (4%) to 394.1 MT overall, Fig. 5. U.S. LNG recovered strongly from the mass cancellations of cargoes and decreased utilizations at liquefaction facilities, growing by 24.9 MT overall. Not only was this the main driver of global LNG supply growth, but also it provided security of supply because of destination flexibility in a tight market. On the back of growing gas production, Egypt’s Damietta facility restarted shipping LNG cargoes in February 2021. Overall exports grew strongly in the fourth quarter, with growth reaching 2.2 MT and providing an annual increase of 5.3 MT. Australian, Qatari and Russian supplies were stable. 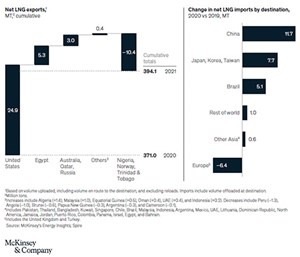 The largest decrease in the market was in Nigeria, Norway, and Trinidad and Tobago. Norway’s Snøhvit has been shut down since a fire in September 2020, but, as previously mentioned, it has been scheduled to reopen during first-half 2022. It finally did re-open in early June. Train 1 of Atlantic LNG in Trinidad and Tobago was mothballed in November 2020. Meanwhile, Nigerian LNG was affected by feed gas issues.

U.S.-delivered LNG exports increased by 70.0 MT in 2021, a rise of 224.9 MT compared with 2020 levels. In 2020, more than 175 U.S. LNG cargoes scheduled for loading between April and November were reported to have been cancelled. And in 2021, the third trains from Cameron and Freeport were operational for a full year, further increasing supply. Exports approached 7.5 MT in December, Fig. 6. 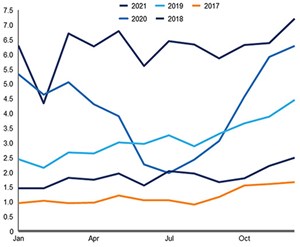 Demand. Chinese demand grew by 11.7 MT (18%) to 77.0 MT overall, Fig. 8. Demand in Japan, Korea and Taiwan grew by 7.7 MT (5.5%), and Brazil increased 5.1 MT (300%). Strong purchasing occurred during the first quarter to meet winter demand, and then in the second and third quarters, with Asian buyers refilling storage. In the second quarter—and continuing into the third quarter—Brazilian imports started to increase significantly to meet a decline in hydropower.

European LNG demand, net re-exports, fell by 6.4 MT (8%) down to 81.2 MT overall, a change driven by large decreases in imports in the first quarter. The fourth quarter saw a strong return to growth as European security of supply issues led European buyers and prices to outcompete Asian buyers.

In the European Union, gas demand increased 6% to 383 Bcm, nearly returning to pre Covid-19 levels, Fig. 9. However, the supply mix has continued to change. Compared with 2019, domestic production declined by about 10 Bcm, or 19%, and in the face of strong Asian demand, LNG imports were reduced from 83 Bcm to 69 Bcm, which is equivalent to 18% of demand. The biggest downward swing factor was Russian imports, which decreased from 175 Bcm in 2019 to 127 Bcm in 2021. To compensate for these declines, Europe has withdrawn a net 22 Bcm from storage, some Bcm more than in 2019. 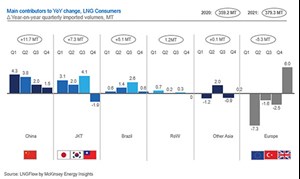 European storage levels have decreased for two years in a row and, by the end of February 2022, were only at approximately 30% of capacity, the same level as in 2018, Fig. 10. If cold weather in March and April causes a moderately strong draw—in the 75th percentile—storage next spring would be reduced to a record low of approximately 8%, increasing the probability of supply running out in some areas. Meanwhile, if the end of winter sees a strong draw, due to either cold weather or supply disruptions, similarly to 2017–2018, then storage would be almost exhausted by the end of spring, making local shortages almost inevitable.

Our upcoming LNG buyer survey journey will assess the relevance of all key journey elements that drive LNG buyer decision-making by asking more than 50 global buyers—which together account for 90% of global demand—questions about the following: 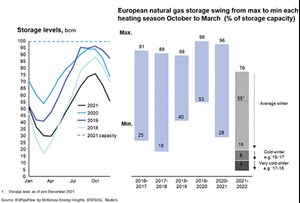