Upstream oil and gas activity in the southwestern U.S. increased for the second quarter in a row during Q2 2022, according to executives responding to the Dallas Fed’s Energy Survey. The business activity index—the survey’s broadest measure of conditions facing Eleventh District energy firms—edged up to 57.7, its highest reading in the survey’s six-year history, Fig. 1. This was after jumping from 42.6 in Q4 2021 to 56.0 in Q1 2022. 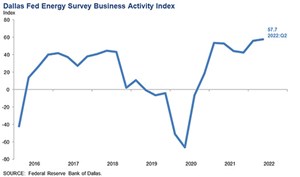 Methodology. Firms are asked whether business activity, employment, capital expenditures and other indicators increased, decreased or remained unchanged, compared with the prior quarter and with the same quarter a year ago. Survey responses are used to calculate an index for each indicator. Each index is calculated by subtracting the percentage of respondents reporting a decrease from the percentage reporting an increase. 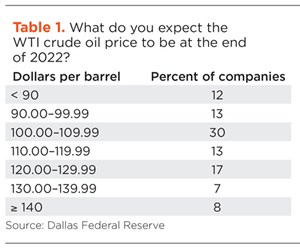 Data were collected June 8-16, and 137 energy firms responded. Of the respondents, 85 were exploration and production firms, and 52 were oilfield equipment/service firms.

Special questions asked of executives included rating the impact of supply-chain issues on their firms; when do they expect their supply-chain issues to be resolved; rating the current availability of personnel, steel tubular goods, equipment, sand and chemicals; what are the primary reasons driving uncertainty in their companies’ outlooks; how much do they expect U.S. oil production to grow; how long it would take to drill and complete an additional well above and beyond current plans; and over the next 12 months, do their firms plan to target wells with a higher natural gas cut. 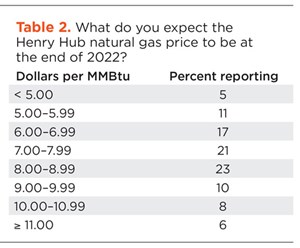 Table 2. What do you expect the Henry Hub natural gas price to be at the end of 2022?

On average, respondents expect a West Texas Intermediate (WTI) oil price of $107.93/bbl by year-end 2022. This is up from a first-quarter average expectation of $93.26. Responses ranged from $65/bbl to $165/bbl, Table 1. Survey participants expect Henry Hub natural gas prices to average $7.55 per million British thermal units (MMBtu) at year-end, up a whopping 65% from the first-quarter average expectation of $4.57 per MMBtu. Responses ranged from $2.90/MMBtu to $12.00/MMBtu, Table 2. For reference, WTI spot prices averaged $119.56/bbl during the survey collection period, while Henry Hub spot prices averaged $8.38/MMBtu. 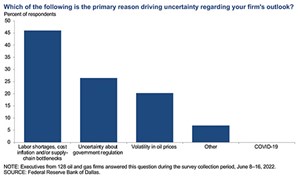 One of the “special questions posed to executives was “Which of the following is the primary reason driving uncertainty regarding your firm’s outlook?” As shown in Fig. 2’s chart, 46% of respondents cited “labor shortages, cost inflation and/or supply-chain bottlenecks.” Another 27% mentioned “uncertainty about government regulation,” while 20% pinned the blame on “volatility in oil prices.” Meanwhile, 7% cited “other” factors as the primary reason for uncertainty. It should be noted that no one mentioned Covid-19 (which was listed as an option) as their primary concern.

In addition, another special question quizzed executives on the notion that if they “wanted to drill and complete an additional well, above and beyond current plans, how long would it take to do so? As depicted in Fig. 3, bulk of answers ranged from a four-to-six-month period up to a 10-to-12-month period. The number one answer from 33% of respondents was four to six months. The next-highest number of answers was from 24% of executives for the seven-to-nine-month period, as well as 24% of respondents for the 10-to-12-month period. A hopeful group of 11% said it would be just one to three months, while a pessimist minority of 8% opted for “more than 12 months.” 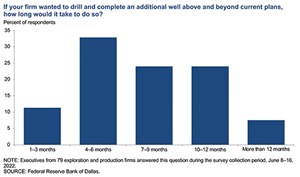 One of the “special questions” posed to executives was “How would you rate the impact of supply-chain issues on your firm?” The results shown in Table 3 are quite enlightening. Among operators in the 11th Fed District, 47% said that the impact was “significantly negative.” Another 47% said that it was “slightly negative.” This leaves just 6% that either said there were no supply-chain issues (2%) or there was no impact (4%). 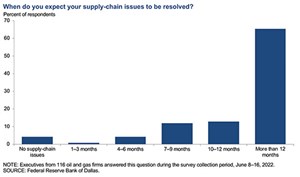 Fig. 4. Special Question about timing on resolution of supply-chain issues. 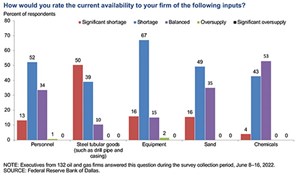 Fig. 5. Special Question on availability of supplies and equipment. 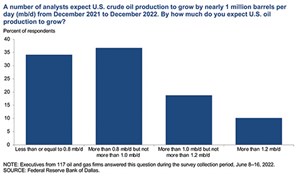 Oilfield equipment and service firms reported improvement across key indicators. The equipment utilization index jumped from 50.0 in the first quarter to 66.7 in the second quarter. The operating margin index advanced from 21.3 to an astounding 32.7, which is a record high in this survey. The index of prices received for services increased from 53.2 to 62.7. 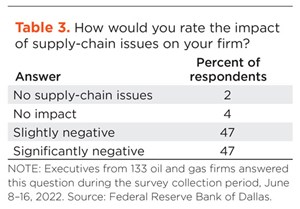 Table 3. How would you rate the impact of supply-chain issues on your firm?

All labor market indexes remained elevated during the second quarter, pointing to strong growth in employment, hours and wages. The aggregate employment index posted a sixth consecutive positive reading, but it declined from 28.0 to 22.6. This is indicative of a slightly slowing rate of expansion in a very active job market. The aggregate employee hours index remained positive, but it dipped from 36.0 to 31.4. The aggregate wages and benefits index decreased from 54.0 to 48.6.

Six-month outlooks improved significantly, with the index at 65.9, a highly elevated reading. The outlook uncertainty index remained positive but fell from 31.9 to 12.4. This suggests that while uncertainty continued to increase on net, fewer firms noted a rise during this quarter, as opposed to the previous quarter. 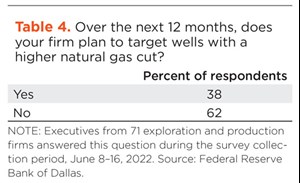 Table 4. Over the next 12 months, does your firm plan to target wells with a higher natural gas cut?

The following statements were received from operators and support services firms in reply to the survey’s Special Questions.

Michael Plante
Dallas Federal Reserve Bank
Michael Plante joined the Federal Reserve Bank of Dallas in July 2010. Recent research has focused on topics, such as the economic impact of the U.S. shale oil boom, structural changes in oil price differentials and macroeconomic uncertainty. He has also been the project manager of the Dallas Fed Energy Survey since its inception in 2016. Mr. Plante received his PhD in economics from Indiana University in August 2009.

Kunal Patel
Dallas Federal Reserve Bank
Kunal Patel is a senior business economist at the Federal Reserve Bank of Dallas. He analyzes and investigates developments and topics in the oil and gas sector. Mr. Patel is also heavily involved with production of the Dallas Fed Energy Survey. Before joining the Dallas Fed in 2017, he worked in a variety of energy-related positions at Luminant, McKinsey and Co., and Bank of America Merrill Lynch. Mr. Patel received a BBA degree from the Business Honors Program at the University of Texas at Austin and an MBA in finance from the University of Texas at Dallas.
Related Articles