Considering its wobbly production, Brazil is doing pretty well in weathering the pandemic. Results of the rescheduled 17th Bidding Round for exploratory acreage were termed successful, although only five of 92 offered blocks were sold.

In that context, Brazil is doing pretty well in weathering the pandemic. Results of the rescheduled 17th Bidding Round for exploratory acreage were termed successful, although only five of 92 offered blocks were sold; the Second Transfer of Rights Surplus Bidding Round received positive results, with offers on both sale areas, Sépia and Atapu.

And from the perspective of the FPSO market, things are positive. Seven of last year’s 10 FPSO contract awards went to Brazilian projects. Ten new awards are expected this year, according to a Rystad Energy report.

Fields operated by Petrobras accounted for 92.5% of all production. The prolific Tupi field in the pre-salt Santos basin led offshore production with 922,000 bopd and 41.9 MMcmgd from a record 63 active wells. The field accounts for about 32% of the country’s production. Onshore, the most active area was Potiguar basin’s Estreito field, in Rio Grande do Norte state, with 992 producing wells. 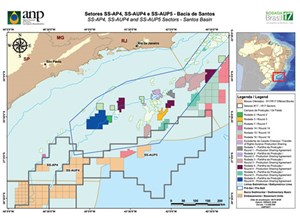 Fig. 1. All of the 17th Round blocks awarded are in the Santos Basin. Source: ANP.

A third cycle of the Permanent Offer was opened, mid-December through Feb. 16. The cycle was prompted by interest expressed by a registered company. The public offers session is scheduled for April 13, 2022.

The Permanent Offer regime is a continuous offer of exploratory blocks and areas with marginal accumulations located in any land or maritime basins that have been returned to the ANP. Registered bidders may express interest in any blocks or areas, as long as they present declarations of sectors of interest, accompanied by a guarantee of offer. According to the ANP, 69 companies are currently registered in the Permanent Offer.

The rescheduled 17th Bidding Round did not generate as much interest as hoped, but enough to earn ANP optimism. Delayed by the pandemic last year, the Oct. 7 sale was a hybrid affair, streamed live on YouTube, while key participants gathered at the Sheraton Hotel in Rio de Janeiro.

Of 92 blocks offered, only five Santos basin blocks received bids from just two companies, Fig. 1. Its focus on riskier exploratory areas, in context with the pandemic, likely dampened spirits, although the government called the results positive. Shell Brasil acquired four blocks and a fifth in a 70/30 split with Colombia’s Ecopetrol. The signature bonus collected from the sale was R$37,140,000.52, Table 1.

Table 1. Blocks acquired in the 17th Round

ANP Director General Rodolfo Saboia deemed the round a success. “It is important to remember that this round focused on new exploratory frontiers, that is, areas with a lot of risk for companies in the sector,” explained Saboia. “And these companies set their budgets the year before. So, they did this when the global pandemic situation was most acute. The context of the international oil industry is still quite challenging. With all this, there was not, and could not be, an expectation that all the blocks would be sold off. Each block acquired on a new frontier is a great victory because, in addition to investments, it represents the opening of new possibilities for future bidding rounds.”

Saboia also highlighted the potential of the auctioned Santos basin area, which is a major producer in the pre-salt. “These blocks can also consolidate the post-salt layer in the region. And the blocks not auctioned will be part of the Open Acreage, with the exception of those located beyond 200 miles, which depend on authorization from the National Energy Policy Council (CNPE),” he concluded.

The Round 17 blocks were located in 11 high-potential and new frontier sectors of four Brazilian maritime sedimentary basins: Campos, Pelotas, Potiguar and Santos. They were offered under the concession model, in which the winning companies or consortia are defined by two criteria: the signature bonus (80%) and the minimum exploration program—PEM (20%)—offered by the bidders.

The bonuses are the cash amounts offered by the companies, from a minimum defined in the tender protocol, and are paid by the winners before signing the contracts. The PEM, measured in work units (WUs), defines a minimum of activities that the company proposes to carry out in the block during the first phase of the contract (exploration phase), such as seismic, well drilling, etc.

The Second Transfer of Rights Surplus Bidding Round was also conducted in 2021 and earned a positive review from ANP. The Dec. 17 sale received offers on both sale areas, Sépia and Atapu, with a signature bonus of R$ 11.14 billion, Fig. 2. As in all rounds under the production-sharing regime, the signature bonuses (amount paid in cash by companies that acquire areas in the bid) were fixed and provided for in the tender protocol. This was also a Covid-19-impacted hybrid event. 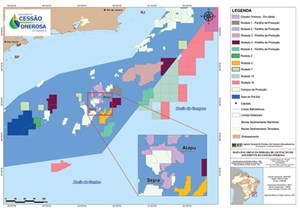 Fig. 2. Both the Sépia and Atapu sale areas received offers in the Second Transfer of Rights Surplus Bidding Round.

The five winning companies expand the diversity of the Brazilian pre-salt exploration and production scenario—increased dynamics, competition and improved profit, said ANP Director Saboia, noting that the round “surpassed our expectations.”

Petrobras describes Atapu, and Sépia as proven high-productivity assets, with good oil characteristics and significant reserves potential. They have low lifting costs and are resilient to low-price scenarios.

Atapu field started production in June 2020 through FPSO P-70 and reached its production capacity of 150,000 bopd in July 2021. It has the capacity to treat up to 6 MMcmgd.

Sépia field started its production in August 2021 through FPSO Carioca, which Petrobras says is the biggest platform in operation in Brazil, in terms of complexity.

In the Transfer of Rights Surplus regime, the Brazilian government directly grants to Petrobras the rights of oil and gas E&P. The company may extract up to 5 Bboe in the pre-salt areas. With the subsequent discovery of volumes above this limit in four oil fields (Búzios, Atapu, Itapu and Sépia), ANP began to auction the surplus, in the production-sharing regime.

The First Transfer of Rights Surplus Bidding Round took place in 2019, when the rights for exploration and production of the oil surplus in the four areas were auctioned, with Búzios and Itapu being acquired.

Production in the pre-salt totaled 1.86 MMboed, about 66% of the company’s total production. In 2015, the pre-salt production accounted for just 24% of Petrobras’ total output.

The 2020 figures exceed forecasts by 5%, due to 0 multiple factors, said Petrobras:

Oil and gas production from FPSO Carioca began in late August 2021. The vessel is the first platform in Sépia field to tap the Santos basin pre-salt. Situated approximately 200 km off the coast of the state of Rio de Janeiro, in water depths of 2,200 m, the Carioca can process up to 180,000 bopd and compress up to 6 MMcmgpd.

The project anticipates connection of seven producing wells and four injection wells to the FPSO. Oil production will be handled by offloading vessels, and gas will be moved via pipeline after CO2 is stripped for reinjection.

The Sépia shared reservoir is comprised of Sépia and Sépia Leste fields. It is operated by Petrobras (97.6%), in partnership with Petrogal Brasil S.A. (2.4%).

A wildcat well in block C-M-411 of the Campos basin has shown pre-salt hydrocarbons, says Petrobras. The Urissanê well is approximately 200 km from the coast, in a water depth of 2,950 m. Petrobras operates the block and holds a 50% stake in partnership with ExxonMobil Exploração Brasil Ltda. (50%), Fig. 3. 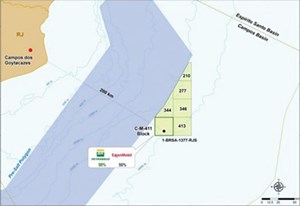 Petrobras plans to develop production from the fields in two modules, called Sergipe Deepwater (SEAP) I and II, including installation of two FPSO platforms. The first platform will be for the SEAP I module. The P-81 platform is scheduled to start production in 2026, with a capacity of 120,000 bopd and 8 MMcmgpd.

The SEAP II module is in the contracting planning phase and is scheduled to start production after 2026. Also in planning stages for the SEAP I and II modules, is a new 18 MMcmd gas flow system that connects the two production modules to the Sergipan coast. 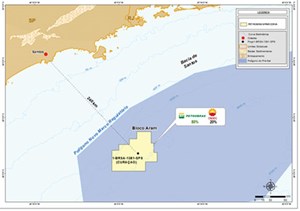 A Santos basin Aram block exploratory well showed hydrocarbons in November 2021, said Petrobras. Well 1-BRSA-1381-SPS (Curaçao) is 240 km from the city of Santos-SP, at a water depth of 1,905 m, Fig. 4. The oil-bearing interval was verified through wireline logging and fluid samples. Operations were continuing to target depth and verify the extent of the new discovery.

Keppel Shipyard Limited will build the P-78 FPSO for Búzios field, in the Santos Basin pre-salt area. It is the seventh unit to be installed and will have a processing capacity of 180,000 bopd and 7.2 MMcmgd. Petrobras said it is scheduled for delivery in 2024. The project foresees connecting 13 wells to the FPSO (six producers and seven injectors)

Discovered in 2010, Búzios field is the largest deepwater oil field in the world. Petrobras describes it as a world-class asset, with substantial reserves, low risk, and low lifting cost.

In the Paraná basin, Petrobras sold its 100% interest in the PAR-T-218_R12 concession to Ubuntu Engenharia e Serviços Ltda. The concession is in the far west of the State of São Paulo, and was acquired in the 12th ANP Bidding Round in 2013.

Petrobras sold its interest in Rabo Branco field in the Sergipe-Alagoas basin. Its entire 50% stake was bought by Petrom Produção de Petróleo & Gás Ltda. (Petrom), which already held the other 50%.

The field in the State of Sergipe is part of the BT-SEAL-13 concession, located south of Carmópolis field. The field’s average production in 2020 was 131 bopd. Petrom is a special purpose entity (SPE) set up to manage activities developed in Rabo Branco field. The company belongs to the Ecom Group, whose activities are focused on the generation and distribution of electricity.

The five Santos basin exploratory blocks acquired by Shell Brasil in the 17th Round are SM-1709, SM-1707, SM-1715, SM-1717 and SM-1719. Shell will be the operator of all blocks and will pay R$35.1 million in signing bonuses. In Block SM-1709, Shell will have a 70% stake, in partnership with Ecopetrol (30% stake). Shell says Brazil accounts for about 13% of thecompany’s total oil and gas production worldwide. The company has been operating there since the early 2000s. With the new blocks, it has 28 exploratory blocks, 1 field under development and 14 fields in production.

Shell’s portfolio was enlarged further in December, with its participation in the Second Transfer of Rights Surplus Bidding Round. The company says its new 25% interest in Atapu field increases its Brazil deepwater holdings to more than 30 exploration and production contracts.

Equinor Brasil and its Bacalhau project partners decided to develop phase one of the pre-salt Santos area field. The investment is approximately $8 billion. Phase 1 development capacity is set for 220,000 bopd. 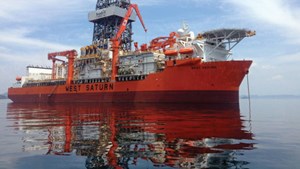 Seadrill Management has been awarded a four-year drilling contract, with start-up planned during first-quarter 2022, Fig 5. The objective is to drill six wells leading up to a production start in 2024. Equinor says it also awarded contracts to Baker Hughes for drilling services and completions; Halliburton for intervention services and liner hangers; and Schlumberger for wireline services.

Bacalhau field was discovered in 2012  and purchased from Petrobras in 2016. It consists of two licenses, BM-S-8 and Norte de Carcará.

Mike Slaton is a contributing editor.