Voluntary capital discipline may not be the only reason that operators are keeping a tight rein on production growth. Celestial intervention may also be at play, says the chief of one pure-play South Texas operator.
Jim Redden / Contributing Editor

Voluntary capital discipline may not be the only reason that operators are keeping a tight rein on production growth. Celestial intervention may also be at play, says the chief of one pure-play South Texas operator.

Chazen’s facetious take nevertheless underscores a nagging issue for operators in the Eagle Ford and the resurging Austin Chalk, aggravated by competition for tight local resources, with the roaring Permian basin to the immediate west. “We have this environment, where even if you wanted to grow a lot, you couldn’t. You can’t get the supplies, you can’t get labor,” said Chazen.

The double-digit inflation compounding supply chain bottlenecks has forced operators to revise 2022 capital budgets, just to meet targeted production levels. One of those is ConocoPhillips Co., which, rather than reduce planned activity to cope with inflationary pressure and stay within the original $7.2-billion budget, chose to increase 2022 expenditures.

“We could have cut our operated scope, in order to try to manage to a number. And given the current macro-environment, that didn’t make sense to us. So that’s why we have raised our capital guidance for the year to $7.8 billion,” said CEO Ryan Lance.

While not breaking out specific plays, ConocoPhillips closed out the first quarter with 22 active rigs and eight frac crews across the so-called “Big Three,” comprising the Eagle Ford, Permian and Bakken. First-quarter Eagle Ford production averaged 208,000 boed, down from the 213,000 boed produced in the final quarter of 2021.

Overall, the Eagle Ford is projected to produce 1.205 MMboed in August, compared to 1.054 MMboed in August 2021, Fig. 1, according to U.S. Energy Information Administration (EIA) guesstimates. Gas production is forecast to increase by 829 MMcfd, year-over-year, to 6.8 Bcfd. Unlike its western neighbor, the mature Eagle Ford and its distinctive gas windows enjoy hefty gas takeaway capacities.

After increasing steadily since mid-2021, drilling activity dropped to an average of around 69 active rigs in July, Fig. 2, down from the yearly high of 72 at the end of June, according to Baker Hughes.

Pure play SilverBow Resources Inc. pointed to the new reality that operators face when trying to nail down an available rig. “We’re entering in an environment that we haven’t seen for many years. We’re moving from, over the last several years, where contracts were pad to pad, now looking at more longer-term type contracts. From an operator’s perspective, we’re trying to lock in those rates, where the service companies are now trying to keep them short, so they can try to capture upside in future pricing,” said CEO Sean Woolverton. Despite escalating costs, the growing Houston operator is targeting double-digit, gas-heavy production growth this year. Second-quarter production is targeted at 225 MMcfed, with year-end production expected to average 272–282 MMcfed.

SilverBow resumed a year-long shopping spree, with recent back-to-back acquisitions totaling $425 million. They added a combined 66,000 net acres and 15,750 boed of production. The deals increased its Eagle Ford-Austin Chalk aerial footprint by 50%, to around 198,000 net acres.

The $354-million acquisition of Sundance Energy Inc. closed on June 30, bringing with it 39,000 net contiguous acres in Atascosa, La Salle, McMullen and Live Oak counties. That followed the May 11 closing of the $71-million purchase of SandPoint Resources LLC and 27,000 net acres in La Salle and McMullen counties. The dual closings make five acquisitions that SilverBow has completed since August 2021.

SilverBow is operating two rigs and a single frac crew, with first-quarter activity centered mainly in the gassy Webb County asset, where nine net wells were drilled, and one was completed. Those included a La Mesa Austin Chalk well with a 9,800-ft lateral—the company’s longest chalk well to date—part of an eight-well pad, also the largest in the company’s history.

Others say the Eagle Ford provides a relief valve of sorts when the supply chain gets particularly tight in their Permian basin holdings. “We recently accelerated the timing of a portion of our 2022 Eagle Ford program to navigate potential Permian bottlenecks that we saw earlier in the year and mitigate some pricing pressures,” said Callon Petroleum Co. President and CEO Joe Gatto. “Looking at our second-quarter production profile, we expect volume to be relatively flat with the first quarter of 2022, while momentum builds from increased completion activity into the second half of the year.” 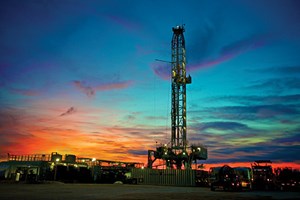 Fig. 2. One of 69 rigs active in mid-July. Image: ConocoPhillips Co.

Callon completed a 10-well project in the Eagle Ford in the second quarter, after wrapping up the first three months of 2022 with 7.2 net (nine gross) wells drilled with no completions. The company also plans to drill and complete an Austin Chalk well in the second half of 2022, on acreage straddling Atascosa and McMullen counties. As of early June, Eagle Ford production averaged 21,000 boed, compared to 82,000 boed from the Permian Delaware basin.

Callon entered the Eagle Ford in December 2019 with the acquisition of Carrizo Oil and Gas Inc., and together with the Permian, the company controls a combined 180,000 net acres, where it is operating an aggregate six rigs and two completion spreads.

For EOG Resources Inc., the estimated 21 Tcf locked in the Dorado dry gas play in Webb County is sufficient to sidestep the company’s long ago shift from natural gas. At break-even costs of less than $1.25/Mcfg, Dorado’s stacked Eagle Ford and Austin Chalk production has doubled over the last year, rising to 140 MMcfgd in the first quarter.

“The world’s changed a lot, and the company has changed quite a bit. The biggest thing for us is that introduction of the premium and now double premium reinvestment hurdle rate. So, all of our gas assets now are judged at a flat price of $2.50 (Mcf), for the life of the well,” President Ezra Yacob said. “Ultimately, what we see with Dorado is that we’ve captured a very significant resource, geographically in the best spot we think, onshore U.S., with access to multiple markets.”

EOG holds 160,000 net acres in the Dorado core, where two rigs and one frac crew will be active throughout 2022. The company plans 30 net completions this year in Dorado, which was unveiled in November 2020. 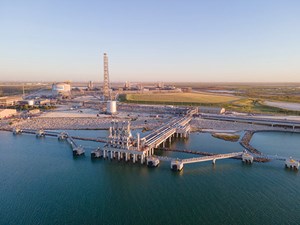 Liquefied natural gas (LNG) exports on the Texas coast are among the multiple markets Yacob mentioned. In March, EOG extended its gas supply agreement with Cheniere Energy that triples the feedstock delivered to Cheniere’s Corpus Christi LNG export facility, Fig. 3, one of three operating off Texas. Under the amended transaction, EOG will sell 420,000 MBtu/d to the LNG facility’s Stage III project for 15 years.

After an extended Covid-induced sabbatical, Chesapeake Energy Corp has returned full-bore to a 610,000-net acre asset, where it will drill and complete 45 to 65 Eagle Ford wells this year, along with an estimated 13-well Upper Austin Chalk delineation campaign. “Just in 2022 alone, we’ll generate $1.2 billion of free cash flow out of the Eagle Ford before hedges, about $600 million after the effect of hedges.” says President and CEO Nick Dell’Osso.

“We’re in a world where people do care a lot about capital discipline, and we think that’s right and appropriate. But I think if you said you wanted to get a new rig and start going after a growth wedge, I think you’re at least six months from that rig showing up at least,” said Dell’Osso.

Elsewhere, SM Energy Co. credits the average eight-month payout from its high-flowing Austin Chalk wells as helping to attract more operators to the Webb County fairway. “The interesting thing is that we’ve noticed now that there’s 11 operators active in Webb County in the Austin Chalk,” said President and CEO Herb Vogel. “So, our well results have definitely been noticed by industry. Activity is picking up out there.”

Nearly all of SM’s drilling and completion activity has centered on the Austin Chalk, with eight net wells drilled and 11 completed in the first quarter, and production averaging 65,800 boed.

“We have elaborated in the past that the West Austin Chalk is a different animal. There’s a large amount of hydrocarbon in place. It is more liquids-rich than the underlying Eagle Ford. And in our area, higher permeability leads to highly productive and economic wells, which we are now showing are also repeatable and predictable,” Vogel says.

Year-over-year first-quarter production increased 15% to 71,800 boed, led by a 24% sequential increase in Giddings. Second-quarter production is expected to range between 72,000 and 74,000 boed. The company will continue to operate two rigs, with one earmarked for multi-well Giddings pads and the other drilling a mix of Karnes and Giddings wells.

Chazen said service cost inflation for both materials and labor is expected to increase 2022 spending by $25 million, due in part to Giddings efficiency improvements leading to additional wells. “Efficiencies such as faster drill times, longer laterals (8,000-10,000 ft) and more wells per pad are expected to lead to more net wells during the year,” he said. “The longer laterals and shorter cycle times are expected to benefit our production volumes during the remainder of 2022 and into early next year.”

Pure play Ranger Oil Corp., for its part, would rather others delineate the Austin Chalk before it gets in on the action. “We don’t have Austin Chalk plans specifically on the drill schedule today. We do have an offset operator that’s just permitted or in the process of permitting an Austin Chalk well directly offsetting our central acreage in Gonzales,” President and CEO Darrin Henke said in a May 5 call.

Ranger instead will concentrate on what will be a 156,000-net-acre Eagle Ford position in Gonzales and Lavaca counties after the third-quarter closing of three bolt-on acquisitions. Together, the cumulative $64-million deals add 17,000 net contiguous acres to Ranger’s leasehold.

“We have such a deep inventory of lower Eagle Ford, low-risk, high-return opportunities and 20 years of inventory, that we don’t really have to spend our risk dollars proving up the Austin Chalk,” Henke said. “We can really allow the operators around us that are not blessed with the same depth of inventory prove up the Austin Chalk, and we can be early adopters there.”

Jim Redden
Contributing Editor
Jim Redden is a Houston-based consultant and a journalism graduate of Marshall University, has more than 38 years of experience as a writer, editor and corporate communicator, primarily on the upstream oil and gas industry.
Related Articles