Executive viewpoint: Texas oil and gas can save Europe—again

The EU should be buying LNG from friendly countries like America, Australia, and other Western democracies to meet their firm generation needs. It’s dependable, affordable, and cleaner than coal.

Like everyone, I’m heartbroken about everything happening in our world right now. As a parent and grandparent, I’m worried about the nation we are leaving for the next generation.

In recent years, it has become painfully clear that climate catastrophism has an oversized influence on public policy. An intense focus on reaching the unattainable goal of carbon-zero has repeatedly caused poor policy decisions that increase costs to consumers and make us more reliant on unreliable forms of energy. Ironically, these policies do not reduce emissions, they just ship them overseas and make us more reliant on hostile foreign nations, like Russia and China. But it doesn’t have to be this way.

Energy security is national security, plain and simple. I know it sounds played out, but it’s a fact. Nowhere is this demonstrated more clearly than in Europe, which had relied on Russia for almost half of its natural gas supply (The New York Times) and unreliable renewables for roughly another fifth of their energy (EIA). The European Union (EU) has painted themselves into an energy-dependent corner and jeopardized their national security as a result.

But Europe is more than a cautionary tale. America could be headed down the same hazardous road if Democratic leadership in Washington, D.C., continues to sacrifice reliable domestic production for foreign markets.

Since taking office, President Biden has made every poor decision that he could to cripple our geopolitical standing in the world and make the U.S. more reliant on foreign oil and unreliable renewables. From handing Afghanistan to the Taliban to destroying our American energy dominance, it’s clear this administration cares more about appeasing radical left-wing activists than doing what is right for the American people.

There are better alternatives, and buying American is the solution. In 2019, the U.S. became a net exporter of energy for the first time in 67 years (EIA), surpassing Saudi Arabia and Russia to become the largest producer of oil and gas in the world (EIA). This gave us affordable energy, thousands of new jobs, economic growth, and national security. Our country achieved this by simply empowering, instead of attacking, domestic oil and gas producers.

The EU should be buying liquified natural gas (LNG) from friendly countries like America, Australia, and other Western democracies to meet their firm generation needs. It’s dependable, affordable, and cleaner than coal. European gas presently trades around $26 per metric million British thermal units, while the price of U.S. LNG is a little over $9 but has been as low as $4 (EIA). Given the right production incentives, it can be that low again. Texas represents a quarter of U.S. natural gas production and can certainly produce more to meet that potential demand.

Currently, American oil and gas producers are seeing all red lights. From growing ESG investments to federal leasing bans to canceled pipelines and increased regulations, there has been little incentive the past two years for investors, producers, refiners and more.

We need to be realistic and practical. Environmentalists’ goal of net zero is a wish, but it’s not an energy strategy. The price of crude oil has skyrocketed, inflation is rampant, and Europe is mired in its first ground war since World War II.

It’s time to switch the lights from red to green. We should be divesting from hostile countries and harnessing American oil and gas, especially right here in the Permian basin.

This wouldn’t be the first time that Texas energy played an impactful role on the world stage. In World War I, Eastland County, Texas, and the “Roaring Ranger” production were essential to the Allied victory (American Oil & Gas Historical Society). In World War II, 6 billion of the 7 billion bbl of oil used to win the war came from the U.S. (theconversation.com), with two East Texas pipelines largely responsible for transporting most of it from the largest oil field in history at the time. Winston Churchill at the end of the conflict said that the war was won on a sea of East Texas oil (KLTV.com). Indeed, Churchill was a long-time believer in the importance of oil during military conflict, and its a lesson that’s still true to this day. In his pre-World War I role as First Lord of the Admiralty for the British Navy, he stressed the echoing point of energy security as national security in his words, “Safety and certainty in oil lie in variety and variety alone.” As Mark Twain once said (supposedly), “history doesn’t repeat itself, but it often rhymes.”

As Chairman of the Railroad Commission of Texas, I led an effort, joined by my colleagues, calling for all oil and gas producers to divest from Russia. I’m glad to see so many companies heeded that call. I’m also mildly encouraged that President Biden came to his senses on Russian oil. However, there is much more that needs to be done to end Putin’s unlawful war, decrease energy costs, and strengthen our national security. As Biden shuts the spigot off on Russian oil and gas, he needs to turn the American one on full blast. 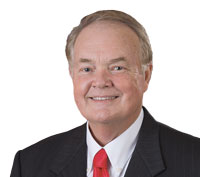 Wayne Christian A lifelong conservative businessman, Wayne Christian was elected as the 50th Texas Railroad Commissioner in November 2016. Prior to his time at the Commission, Mr. Christian served seven sessions in the Texas House of Representatives, accumulating a strong record of standing for free markets and against burdensome regulations. He is married to his wife, Lisa, and together they have three daughters and five grandchildren. You can learn more about Chairman Christian here: https://rrc.texas.gov/About-Us/Commissioners/Wayne-Christian/.