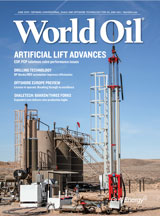 Robert Kurz
An innovative PCP system is a cost-effective alternative for moving high-viscosity crudes, compared to the conventional separation process.

Beyond efficiency into the next S-curve of production

Eric Carre
For the last five years, our industry has focused on reducing cost through operational efficiency and supply chain management.

Armelle Lecarpentier
It was a remarkable year for the global natural gas market during 2018. Natural gas supply and demand grew at their fastest pace since 2010

The SPE Offshore Europe 2019 conference and exhibition is fast approaching.

SPE Offshore Europe 2019: Breakthrough to Excellence – Our license to operate

Recognized by professionals in the upstream industry’s offshore sector as Europe’s leading E&P event, the SPE Offshore Europe (OE) Conference & Exhibition is gearing up for another year in Aberdeen, Scotland.

The business and operational improvements implemented during the downturn have positioned the UKCS as a much more attractive basin for E&P companies.

Craig Fleming
Escalating trade tensions between the U.S. and China caused crude futures to plummet 19% in May.

Emily Querubin
Sparrows Group has won contract renewals worth an estimated £30 million on the UKCS.