(Bloomberg) ­— The Biden administration on Monday moved to stiffen offshore oil drilling safety measures that were imposed in the wake of the Deepwater Horizon disaster but later eased under former President Donald Trump. 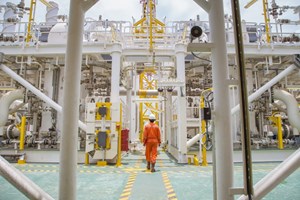 Most of the proposed changes take aim at blowout preventers, emergency devices meant to to be a final check against runaway wells. The devices drew scrutiny after a BOP failed to keep crude and flammable gas in check at BP Plc’s Macondo well in the Gulf of Mexico more than a decade ago. The resulting explosion killed 11 workers and unleashed the largest oil spill in US history.

The proposed changes could hike costs for oil companies operating in the Gulf of Mexico, even as energy supply concerns stoke calls for more production. The Interior Department estimates the requirements would cost an estimated $2.4 million over 10 years.

The proposed changes, now subject to public comment, mark another evolution in offshore drilling safety regulations since a series of investigations into the 2010 oil spill. Under former President Barack Obama, the Interior Department imposed broad well control and testing requirements in 2016. Some of the mandates were eased by Trump three years later, and are now being further revised under President Joe Biden.

“They will protect workers’ lives and the environment from the potentially devastating effects of blowouts and offshore oil spills,” Kevin M. Sligh Sr., director the Bureau of Safety and Environmental Enforcement, said in a news release.

The requirements fall far short of the halt in offshore oil leasing some environmentalists argue is necessary to both prevent future spills and combat climate change. Under the new climate law, the Biden administration is required this week to issue oil and gas leases that were purchased in an auction of Gulf of Mexico drilling rights last year, even though a federal judge subsequently invalidated the sale.

“Offshore drilling is inherently dirty and dangerous, and blowout preventers are not reliable,” said Diane Hoskins, a campaign director with the Oceana conservation group. “While the new safety measures being proposed are a step in the right direction, no operator can promise there won’t be another disaster like BP’s Deepwater Horizon blowout.”

The new Biden administration proposal would clarify the strength needed for blowout preventers to better ensure their blades can sever drill pipe in a well and effectively seal it off, keeping rushing oil and gas locked within.  The Interior Department would also require swifter investigations of failures and force oil companies to turn over data about the incidents directly to the agency’s Bureau of Safety and Environmental Enforcement. Under current policy, oil companies can share the info with third parties instead.

The measure would require companies to install BOPs that have two shearing blades whenever they replace the devices at existing floating production facilities. The redundancy is meant to boost the odds of slashing through drill pipe and other debris to contain oil and gas in an emergency.

Industry officials said they were still studying the proposal. “We will review and work with industry and regulators to ensure that the proposed regulatory changes increase safety and decrease risk,” said Erik Milito, president of the National Ocean Industries Association.