TDI-Brooks completes six geotechnical programs in the Gulf of Mexico

(WO) — TDI-Brooks has completed six geotechnical coring programs in the Gulf of Mexico for numerous operators from its research vessel the RV Gyre, the company announced on Monday. Each of the programs included deployment of TDI-Brooks cone penetrating test (CPT), piston (PC) and jumbo piston corers (PC) and box corers (BC). 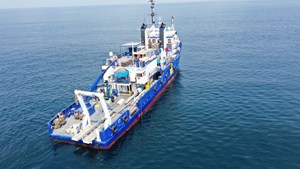 In some instances, the geotechnical coring supplemented AUV operations. These programs covered a wide range of operations including surveying in channels off the coast of Galveston, surveying LNG export loading facilities, surveying of oil export pipeline routes to name a few.

One program included and Environmental Baseline Survey (EBS) including grab samples, CTD, rosette, niskin and plankton trawls. TDI-Brooks provides marine environmental baseline surveys (EBS) for coastal, nearshore and offshore projects for the oil & gas sector, offshore wind farm and other renewables programs, cables and pipelines. Since inception of the EBS concept in the early 1970’s, TDI-Brooks’ scientists have been performing EBSs for clients in the most rigorous regulatory environments.

All sediment and water samples were then sent to TDI-Brooks’ geotechnical and chemical laboratories in College Station, Texas for analysis.

The RV Gyre will transit to Trinidad & Tobago at the end of June for some awarded G&G programs in that region.