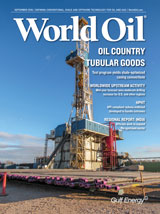 Heather Byers
Before 2002, connections designed for drilling and completions were tested at the discretion of a specific manufacturer.

Dr. Dhiren Panda (1)
New connections have been developed to address the emerging needs of wells in unconventional shale plays, with longer laterals. These premium and semi-premium connections are targeted for use, where higher torque requirements are necessary to land the casing, as well as to ensure proper cementation. Combined with high performance tubulars, these connections allow operators to land the casing string quicker, and reduce non-productive time.
Features

Robert Curran
Canada’s arduous climb from its recession is underway. But there’s still a long road ahead. Resurgent oil prices are not enough to offset uncertainty caused by low gas prices and lack of pipeline capacity.

Emily Querubin Michele Cowart
Some semblance of “normalcy” is returning to the global EP industry after three wrenching years of activity recession.

Lee Reynaud
Slickwater systems tend to have low viscosity, which can attribute to difficulty with effectively suspending and transporting proppant in a fracture. Accordingly, a new, low-density proppant has been developed to enhance the transport capability in slickwater fluids and provide increased fracture conductivity.

Ryan Phillips Keegan Tooley Fred Bingham F. Justin Rodriguez
As drilling progresses into deeper waters that require more complicated well profiles, there is an increasing need for equipment that can withstand higher pressures, temperatures and casing/structural loads. A 20,000-psi, 350°F-rated, 18¾-in. HPHT wellhead has been developed to satisfy these requirements.

Michele Cowart
Over the next 30 years, India is predicted to be one of the world’s fastest-growing economies.

QI can be helpful for drilling decisions in unconventional plays

Kurt Abraham
Moderate, stable growth is in the offing

Craig Fleming
OPEC crude production rose to 32.74 MMbpd in August, the highest level this year, as an increase of 310,000 bopd in Libya helped offset a 240,000-bopd reduction in Iranian output (Bloomberg).

Michele Cowart
LLOG Exploration delivered first production from its Crown and Anchor fields in the Gulf of Mexico, during second-quarter 2018.